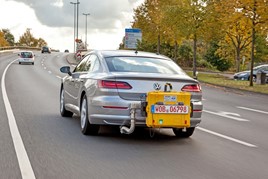 Emissions regulations are changing again in September, but vehicle supply should not be affected according to Cap HPI.

The WLTP “Second Act” will take effect on September 1. It means all manufacturers must ensure new models are 'certified' to show they have passed the more stringent WLTP tests before they can be placed on the market.

Every manufacturer will ensure that every new car is certified under the new type approval (Euro 6d Temp) before it can be allowed on sale.

Cap HPI has advised the recertification is an administrative exercise that does not require physical re-testing.

Although, vehicles that fail to meet the Real Driving Emissions (RDE) stage 1 requirement will no longer be able to be sold.

Beth Davies, product manager at Cap HPI, said: "We have seen widespread reporting of concerns around supply shortages in September but find this is extremely unlikely.

“The WLTP 'second act' certification is simply a revision of the existing WLTP testing regime. Vehicles will not be physically tested but instead processed through revised algorithms and confirmed as re-certified."

The data company says it has already moved to recognise the new 'second act' identifier in its New Vehicle Data.

According to Daimer, more than 90% of the Mercedes-Benz Cars fleet already comply with the Euro 6d-Temp emissions standard (obligatory for all vehicles from 1 September 2019) or even Euro 6d, which will not be in place until January 2020 for new models.

Jurgen Franke, head of GL WLTP Management at Volkswagen Group, said: “Volkswagen has learned a lot from the experiences of the last year. Less popular model variants have been discontinued, and processes, capacities and IT systems have been optimized. We are confident that we will be able to significantly reduce the impact of the new WLTP 2nd act compared to last year.”

Fleet Poll
What will your next company car be?
Vote
View all
75