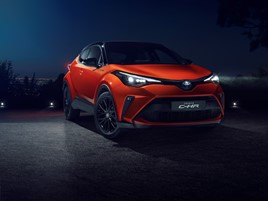 External changes include LED headlights with daytime running lights and indicators combined in one “frontal projector”.

A painted lower lip “reinforces a strong, wide and elevated stance”, while at the rear, the new combi lights are connected by a gloss black spoiler “creating a single clean shape”.

Prices start from £25,625 for the entry-level Icon model. Company car drivers and fleet decision-makers can also choose from Design, Excel and Dynamic grades, all available with either 1.8 or new 2.0-litre hybrid powertrains. The range-topping ‘Orange Edition’ rounds off the line up.

Toyota launched the C-HR compact crossover in 2016. Based on its Global Architecture platform, the car was developed from concept cars displayed at Paris in 2014 and Frankfurt in 2015.

It made it's fleet debut at the 2016 Company Car in Action and now enjoys a 8.3% segment share in the UK.

Last year Total Security Services (TSS) announced that it was replacing all diesel vehicles in its fleet with 70 self-charging hybrid electric Toyota C-HRs.

Speaking at the time, Dan Gursel, general manager of Enterprise Car Club, said: “We’ve introduced the crossover hybrid SUVs to increase options for customers looking for a roomy and luxurious vehicle that is also sustainable. It is a great choice for those who need more space or prefer to drive a more premium model.”

Toyota will be presenting a selection of premieres and first drive opportunities at Company Car In Action on June 14-15.

Total Security Services (TSS) has revealed the replacement of the diesel models in its fleet with 70 self-charging hybrid electric Toyota C-HR crossovers.

Toyota has refreshed the trim levels on the C-HR crossover, adding more specification and a new Design grade.