Fleet registrations remained stable (+0.3%) with just under 80,000 vehicles registered in the month, according to the latest SMMT figures.

It leaves the new car market -2.9% year-to-date, with fleet and business sales accounting for around 55% of the total number of cars registered this year. 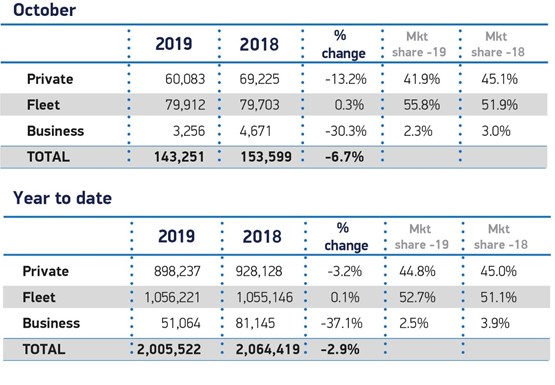 Electrified cars continued to grow in popularity. Hybrid cars increased by a considerable +28.9%, with 7,950 leaving showrooms, as battery electric vehicle registrations almost tripled, up +151.8% to 3,162 units.

Plug-in hybrids fell just short of their positive performance in the same month last year, down -1.7%.

Combined, alternatively fuelled vehicle registrations reached 9.9% market share in the month – the highest on record, up from 6.9% last year.

Mike Hawes, SMMT chief executive, said, “The growth in alternatively fuelled cars is very welcome, showing increasing buyer appetite for these new technologies. The overall market remains tough, however, with October now the year’s eighth month of decline and in need of an injection of confidence. Whether the general election delivers a ‘bounce’ to the economy remains to be seen but, with attractive deals and an ever-greater choice of low, ultra low and zero emission models arriving in the UK’s showrooms, consumers have every incentive to consider buying a new car.”

There was a mixed picture across body types, with the popular supermini segment experiencing a substantial decline (-23.4%), while dual purpose and small family car registrations grew +7.1% and +3.3% respectively.

UK’s most popular cars in October

The Ford Fiesta remained the UK’s best-selling car in October, with more than 5,000 sold. The Volkswagen Golf remained in the top-three despite the reveal of the next-generation model taking place in the same month.

Five of the top-10 best-selling cars in October were SUVs, with the Nissan Qashqai leading the pack, taking second place overall. The new Range Rover Evoque also made its way into the top-10 with 2,134 registrations.

> MORE: Fleet car registrations by manufacturer in October 2019, year-to-date and in 2018

Matt has been an automotive journalist for three years. As senior staff writer he is responsible for the automotive content on Fleet News and also contributes to Automotive Management. Prior to this, Matt worked in the automotive industry for 10 years.