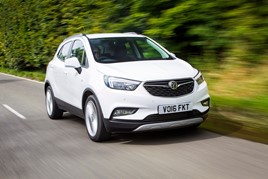 Vauxhall has stopped taking orders for its Mokka X compact SUV after production of the model ended in June.

The Nissan Juke rival will be replaced next year with a new model that will feature a fully electric powertrain.

Its departure leaves the manufacturer without a model in the highly-competitive compact SUV sector.

A Vauxhall spokesman told Autocar that only existing dealer stock is available and volumes are running low.

The Mokka is Vauxhall’s oldest model, having been on sale for seven years and amassing more than 200,000 sales in the UK alone.

More than 21,000 were sold this year, making it Vauxhall’s second best-selling car behind the Corsa. Around 1,500 units went to fleets.

The Mokka X was refreshed in 2016 but it retained powertrains that pre-date Vauxhall’s acquisition by PSA Group. Now only the Astra and Insignia remain on GM platforms.