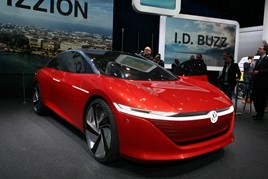 Organisers have been forced to cancel the Geneva Interenational Motor Show, because of concerns over coronavirus.

The show, which was due to take place next week, is Europe's biggest motoring event, providing a platform for manufacturers to unveil their latest models.

Volkswagen, for example, was due to unveil new Golf GTI, GTD and GTE, Fiat was launching the Fiat 500 electric and BMW was set to reveal the new BMW iX3.

However, despite insisting the show would be going-ahead within the past 24 hours, organisers have had the decision taken out of their hands with the Government introducing a ban on public gatherings of more than 1,000 people until at least March 15, in response to the coronavirus threat.

It is the first time the show has been cancelled since the Second World War.

"The Federal Council's top priority is to protect the population," the Government said in a statement. "It is responding to the latest developments in the coronavirus epidemic and has categorised the situation in Switzerland as ‘special' in terms of the Epidemics Act."

Maurice Turrettini, chairman of the show's board, said: "We regret this situation, but the health of all participants is our and our exhibitors' top priority."

He said it was a "tremendous loss" for the manufacturers who have invested "massively" in Geneva.

The first confirmed coronavirus case in Switzerland was announced on Tuesday. Numbers of infected people have been growing throughout the week and the number of tests on suspected cases has been ramped up.

Some major events, including two watch fairs, the Engadin ski marathon and carnivals in the southern canton of Ticino, bordering Italy, had already been cancelled.

The show's cancellation comes as stock markets suffered their worst week since the global financial crisis of 2008 as coronavirus fears grip investors.

London's FTSE 100 index sank more than 3% on Friday morning, while Asian markets saw more big falls and in the US the Dow Jones recorded its biggest daily points drop on Thursday.

Investors are worried that the coronavirus impact could spark a global recession.