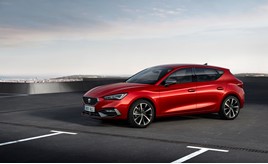 The new Seat Leon has been given strong residual value predictions of up to 41.4% by Cap, giving it a low total cost of ownership (TCO) for fleets.

Combined with its low P11d value, starting from £19,855, the new model will cost operators from 24.6p per mile over its lifetime.

The range includes petrol and diesel models, as well as mild hybrid and plug-in hybrid options.

Craig Cavanagh, head of fleet at Seat UK, said: “We know that it’s more important than ever for fleet managers to focus on getting the best value they can, which is why we dedicated so much energy on  reimagining the all-new Leon to become an even more inviting proposition to drivers and decision-makers alike.

“Through its many generations, the Leon is renowned as an accessible, practical and desirable option for fleets and the all-new Seat Leon takes that a step further: keeping the total cost of ownership so low that it’s more affordable than ever before, while making it one of the most feature-packed cars in the segment.”

The new Leon has recently opened for orders and Seat believes it is set to become a favourite among fleet managers, improving on the outgoing model with an uplift in technology and quality alongside even more connectivity and safety features.

The 1.0 TSI 110PS SE Dynamic is expected to be the most attractive option for fleets, featuring the 10.25-inch Seat Digital Cockpit and 10-inch infotainment screen. The specification also introduces tinted rear side windows, 17-inch alloy wheels and Park Assist.

The Leon range will soon be extended to offer fleet customers plug-in hybrid options, with BiK of 10%.

Performance sub-brand Cupra will also be introducing its own version of the Leon later in the year, which will also include a low-BiK plug-in hybrid.

Performance brand Cupra has revealed its latest new model, based on the new Seat Leon, including a low-emission plug-in hybrid.