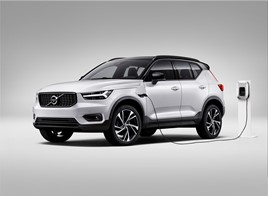 Volvo has stopped taking orders for diesel-powered XC40 models to coincide with the introduction of new plug-in hybrid and fully electric versions.

It is now available in B4 and B5 mild-hybrid petrol, T4 and T5 plug-in Hybrid, and P8 fully-electric. The T2 and T3 petrol units also remain available.

The new B4 produces 197PS and is available with front- or all-wheel drive, while the 250PS B5 comes exclusively with all-wheel drive. An eight-speed automatic transmission is standard on both.

The brand has also re-aligned its powertrain line-up on other models, introducing a new T6 plug-in hybrid variant.

The XC60 has gained the same T6 version.

Currently, the brand’s new mild-hybrid diesel engines are offered on the V60, V90, XC60 and XC90. These replace the old units and are badged B4 and B5.

In the coming years Volvo Cars aims to establish itself as a leader in electrification and by 2025, it wants half of its global sales volume to consist of fully electric cars, with the rest hybrids.