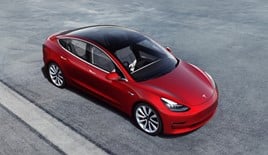 Tesla expanded its UK dealer network to 25 sites during 2020 and plans further network growth in 2021.

It represents a U-turn on company founder Elon Musk’s 2019 declaration that Tesla would close all its showrooms in favour of an online-only sales model.

Six new Tesla locations were opened across the UK in 2020, with new showrooms appearing in Newcastle, Winchester, Gatwick, Belfast, Birmingham and Chelmsford.

A new site in Glasgow is also poised to open this year.

The Californian car maker says it has boosted its aftersales operation significantly and now has 15 service locations across the country, with more than 300 service team members.

This has led to a 130% increase in available service appointments and a 60% reduction in waiting times for appointments, according to the brand.

Tesla says it can reduce the time vehicles need to be in a workshop using remote diagnosis and can perform a service four times faster than conventional garages, enabling it to operate with a smaller footprint.

The brand achieved almost 25,000 registrations during the year, outperforming established brands such as Fiat, Mazda, Porsche and Suzuki.

Its Model 3 topped UK monthly sales charts twice during the year – once in April and then in December.

The vast majority of sales are the Tesla Model 3 – Tesla insiders suggest the Model 3 accounts for approximately 90% of UK Tesla sales YTD. That makes the Model 3 the UK’s best-selling battery electric vehicle (BEV), and the UK’s second best-selling compact executive model behind the BMW 3 Series.

Tesla's UK Supercharger network also grew during 2020 with the addition of 180 new chargers in 20 locations, bringing the total to more than 600 chargers in 70 locations.

Tesla’s new Model 3 has picked up a string of accolades in the Parkers New Car Awards 2020, including Company Car of the Year.