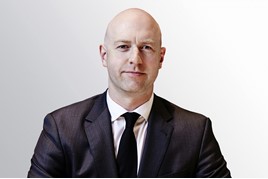 Volkswagen Commercial Vehicles director Cian O’Brien described 2020 as a “tale of two halves” for the company in his first address to the UK media since taking up the role last July.

“But our growth rate in the second half of the year outstripped the market by some way,” said O’Brien.

The former Audi US chief operating officer pointed to the run-out of the Amarok pick-up and Caddy, plus loss of production, especially for the Transporter, for worsening the Covid-created market downturn.

However, Crafter enjoyed a strong second half “finding new fleet customers all the time”, resulting in a full-year model drop of less than 6%, as growth in online shopping and greater demand from essential services such as the ambulance sector boosted its performance.

“We had the right products at the right for the market,” said O’Brien. “We now look forward to the new Caddy on the horizon and we will have T7 details to share on the passenger carrying variant in the second half of this year.”

After that will come details on the “eagerly-awaited” ID Buzz and new Amarok in 2022, he added.