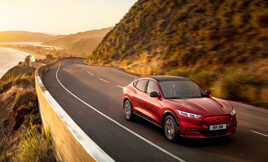 Ford has committed to new greenhouse gas emission targets, in its 2021 Integrated Sustainability and Financial Report summary, to help it achieve carbon neutrality by 2050.

By 2035, the car maker has set an interim target of reducing absolute greenhouse gas emissions from company global operations by 76% and from new vehicles sold globally by 50% per km.

Key to the reduction of emissions is the development of electrified vehicles. Ford recently revealed its strategy for all passenger vehicles sold in Europe to be electric by 2030.

For commercial vehicles, Ford’s product range in Europe will be zero-emissions capable, with all-electric or plug-in hybrid offerings, as early as 2024.

Spearheading the move to electric is the $1 billion (£730m) investment to transform the company’s vehicle assembly facility in Cologne into a centre for the manufacture of electric vehicles, Ford’s first such facility in Europe.

The next generation Ford Transit Custom range will include all-electric models built by Ford Otosan in Turkey, further advancing the brand’s electrification strategy and commercial vehicle leadership in Europe.

“We will lead in achieving carbon neutrality because it’s the right thing for customers, the planet and for Ford,” said Bob Holycross, chief environment and sustainability and safety officer, Ford Motor Company. “95% of our carbon emissions today come from our vehicles, operations and suppliers, and we’re tackling all three areas with urgency and optimism.”

The company’s 2050 carbon neutrality goal is aligned with the Paris Climate Agreement, which the US recently recommitted to and Ford fully supports.