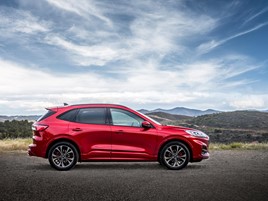 Ford will begin recalling Kuga PHEV models to replace their battery packs, following an announcement in August that a potential fault could lead to fires.

Sales of the plug-in hybrid (PHEV) SUV were halted in the Summer when it was discovered that the car’s battery pack could overheat and cause a fire.

The manufacturer says it has now identified the cause of the issue and will replace the battery packs in all affected vehicles.

A statement issued by the brand said: "The root cause has been identified as a battery cell contamination issue in our supplier’s production process and we have determined that the best course of action for the safety of our existing customers is to replace the drive battery pack."

The same issue was discovered with batteries used in some BMW plug-in hybrid vehicles.

The recall will require the car to be in a workshop for at least one day. Ford will offer a collection and delivery service, as well as courtesy vehicle where required.

Ford says it will carry out the necessary repair to all affected vehicles between late December 2020 and March 2021.

Ford will provide extended warranties or £500 fuel vouchers as compensation to affected owners.

Drivers are advised not to charge their vehicle and not to use the EV Mode, Sport or Snow settings until the vehicle has been repaired.

BMW is recalling 3,000 plug-in hybrid models in the UK due to battery fire concerns.

Lisa Brankin has been appointed the new managing director of Ford of Britain, replacing Andy Barratt who has elected to retire.