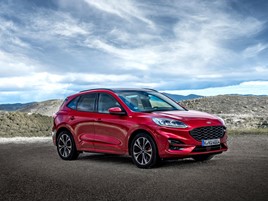 The brand has issued a safety recall for all affected models, and said repairs will commence later this month once the required parts are available.

A report by Autocar this morning stated that existing owners of the Kuga PHEV model have been told not to charge their cars “until further notice”.

Ford admits that this overheating can occur "when the vehicle is parked and unattended or is charged".

The magazine also said that Kuga PHEV owners have been asked to keep the car in its "EV Auto" drive mode – steering clear of zero emissions ‘EV Mode’ – until further notice.

Concerns surround vehicles built before June 26, according to Ford, which told Autocar that "information from the field indicates that four vehicle fires are likely to have been caused by the overheating of the high-voltage batteries".

It is estimated that 27,000 models worldwide are affected.

While petrol and diesel versions of the new Kuga remain available, the PHEV version has already proved popular with buyers and fleet customers, becoming the most popular model.

Prices start at £33,095 – the same as the two-litre turbodiesel equivalent – and the front-wheel-drive model combines a 2.5-litre petrol engine and electric drivetrain to deliver a combined 225PS.