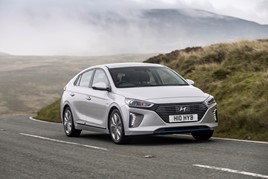 Hyundai Ioniq models have been found to pass their MOT test for the first time more frequently than any other car.

In a study compiled by What Car?, the electrified model came out on top with a 96.18% average first time pass rate.

The Ioniq sits above the BMW i8, which is also powered by an electrified powertrain, achieving a 95.97% pass rate.

What Car? analysed more than 745,000 anonymised MOT records published by the Department for Transport to find out the models that had the best rate for passing the MOT test at the first attempt*. Models aged from three to eight years old and with a sample size of at least 100 cars were included in the study.

Korean, Japanese and German models dominate the top 10, while the Jaguar F-Type (2013-present) is the highest-placed British model in the study sitting in 14th place with an average MOT pass rate of 90.83%.

The Tesla Model S (2014-present) is the highest ranking pure electric vehicle, in 26th place, with an average pass rate of 89.94%. Although there are many premium models in the top 50, there are also several affordable small cars, including the Peugeot 108 (2014-present) and Toyota Aygo (2014-present).

What Car? has also ranked the top and bottom brands for MOT pass rates. As well as achieving the highest average pass rate, Porsche is the only brand to gain a pass rate of more than 90%. Although Ssangyong has the lowest MOT pass record, its result of 76.98% means that more than three quarters of its models passed their MOT the first time.

Steve Huntingford, editor of What Car?, said: “One of the first things used buyers do is check a vehicle’s MOT record to see how well it’s been maintained and if it’s suffered lots of faults. Our extensive study reveals the models with the best MOT pass rates, ranging from large SUVs to city cars. Buyers can use it to help them choose the most dependable models.

“Although the top 50 list contains several prestige cars, that tend to have lower mileage and immaculate service records, it’s reassuring to find some budget and family cars in the mix.”

The number of cars that have missed their MOT test expiry by more than three weeks has tripled during the last six months.

Hyundai has reduced the prices for certain Kona Electric and Ioniq Electric, to ensure they are eligible for the plug-in car grant.

Hyundai has entered a strategic partnership with Uber to provide its drivers with discounted access to electric Kona and Ioniq models across Europe.