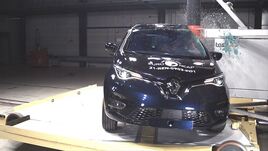 The Renault Zoe has been given a zero-star safety rating by Euro NCAP in the latest round of testing.

It becomes only the third car in history to be given zero-stars by the organisation.

The Zoe was previously a five-star car, when it was initially launched and tested in 2013. Numerous revisions to the safety testing protocol have since been introduced by Euro NCAP to reflect evolving technology.

Renault facelifted the car last year, removing a side airbag that would protect an occupant’s head in the event of a side impact.

In the frontal offset crash the Zoe was rated as ‘poor’, due to "weak" protection for the chest area of the driver side dummy specifically. But it was Euro NCAP’s severe side pole test that revealed the most drastic results, with the driver’s head directly impacting the intruding pole.

Matthew Avery, Thatcham Research’s chief research strategy officer and Euro NCAP board member, said: “It is a serious concern to see results like this in 2021, especially from a carmaker who has previously performed well in Euro NCAP testing.

“Renault was the first to achieve the full five-star rating in 2001, in part because it was also the first to include a combined head and thorax airbag in the Laguna 2. Although this was a new and revolutionary safety measure at the time, today this airbag is available on most modern cars.

“Unfortunately, a conscious decision has been made to remove the head protection from this vital passive safety feature, by the brand that pioneered the use of it. As a result, the safety of occupants within the vehicle has been severely impacted.”

Avery added: “Drivers should not have to trade off safety for zero emissions. Motorists can still save the planet and enjoy a car that could play a vital role in saving their family in the event of a crash. There are many other options of a similar price and size that have achieved solid ratings and feature a host of active safety systems as standard too. Even looking within the Renault stable, the Clio is an affordable five-star hybrid vehicle that retails at £10,000 less than the Zoe and still allows drivers to be environmentally conscious without sacrificing safety.”

One-star for the Dacia Spring

Dacia, part of the Renault group, is another carmaker to see poor performance in the final round of safety testing this year.

The Dacia Spring, a brand-new electric vehicle in the Supermini class, obtained a one-star rating in Euro NCAP tests. The Spring is fitted with the airbag that had been removed from the new Renault Zoe, but it still returned a poor performance across all categories, resulting in a 49% score for Adult Occupant and 56% for Child Occupant Protection.

Other vehicles included in this round of testing performed better, with the BMW iX and Genesis G70 and GV70 receiving five-star ratings.

Other five-star performers include the Nissan Qashqai, Skoda Fabia and Volkswagen Caddy.