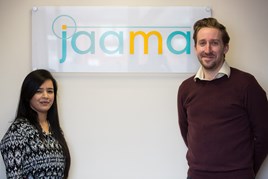 Fleet management software provider Jaama is continuing with its growth plans for 2017 by creating more new positions within the business.

Doel has worked in the software industry since graduating with a BSc (Hons) in computer science in 2010 and an MSc in IT project management in 2011 from Aston University. To date she has held roles as a software developer, software tester and business analyst at two software companies prior to joining Jaama.

Whitehurst graduated with a mathematics degree from Cardiff University in 2007 and started working life as a data analyst in a company in Derby. After six years, during which he progressed into project management and technical training roles, he moved to a software house in the facilities management and corporate real estate industry as a project manager, managing projects from conception to close.

Jaama managing director Martin Evans said: “2016 was another fantastic year for Jaama with revenue up by 18% as an ever-increasing number of organisations decided to utilise our Key2 web-enabled technology which has driven the need to recruit additional staff.

“What’s more, with Jaama firmly focused on continued investment in its Key2 product - a number of exciting developments will be unveiled throughout 2017.”