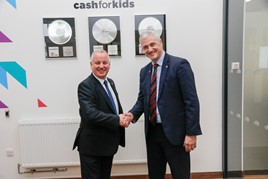 Arnold Clark chairman and chief executive Eddie Hawthorne has been named as the new chairman of the Board of Trustees at Radio Clyde's Cash for Kids charity.

Hawthorne (pictured) will take over from Lord Jack McConnell who is stepping down from the charity after seven years in the post. In that seven years the charity has raised over £10 million and helped nearly 700,000 children and young people in the West of Scotland.

McConnell said: “I am very pleased that Eddie Hawthorne has agreed to take on the challenging role of chairing the Board of Trustees moving forward.

"Together with all of the other Trustees, the radio station staff, and of course Debbie Fraser and her amazing team, I have every confidence that Eddie will successfully take us on to whatever challenges lie ahead.”

In April 2018, Radio Clyde Cash for Kids has established The Sir Arnold Clark Summer Camp Fund to give local children living in poverty in Glasgow and the west of Scotland life-enhancing and memorable experience during the summer holiday period.

Arnold Clark was the first organisation to win a platinum award from Radio Clyde Cash for Kids in recognition of its generous support of vulnerable children across Glasgow and the West of Scotland.

Hawthorne said: “The Arnold Clark group has been supporters of the work Clyde Cash for Kids carries out for many years.  Child poverty remains a blight in today’s society and the work that Cash for Kids does to tackle this issue head on is vital.

“Children and their families, living in our own communities, face daily challenges which have direct impact on their health and wellbeing and the charity’s daily efforts work towards making their lives better.

“I am looking forward to building on the legacy that Lord McConnell leaves to ensure that the tens of thousands of children that the charity reaches every year continues."

Arnold Clark Vehicle Management (ACVM) has launched a new employee car plan, Affinity Cars, aimed at employees who do not have access to a company car.