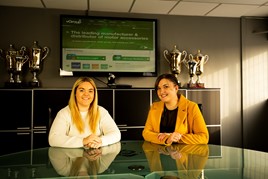 The restructuring, which is designed to drive the next phase of expansion at the Milton Keynes-headquartered company, sees:

vGroup International’s managing director James Nash said: “Our relationship with the UK’s small, medium and large contract hire and leasing businesses is critical to the on-going expansion of the company.

“As vGroup International already enjoys long-established business partnerships with many of the major UK vehicle leasing and contract hire companies, which are also well established overseas, the corporate model already exists and those relationships are being extended.

“Both Laura and Kirstie have significant knowledge and experience of vGroup International gathered over a number of years and that will be vital in supporting leasing company customers, while Justine will use her vLease division know-how to leverage vGroup International business specifically in the global leasing sector.”

Ahead of the first regulatory changes to vehicle number plate’s vGroup has launched a new division, vPlate.

Fleet operators and dealers can now offer screen wash in the form of a soluble tablet to reduce plastic use.