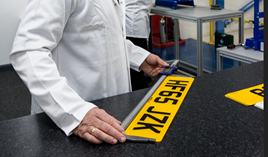 Ahead of the first regulatory changes to vehicle number plate’s VGroup has launched a new division, VPlate.

The launch is aimed at shaking up the UK vehicle number plate market by adopting a new manufacturing process, while also coinciding with the anticipated September 1, introduction of British Standard (BS) AU145e, which will replace BSAU145d and notably focuses on improving the readability of number plates.

VGroup International’s managing director James Nash said: “We have designed and launched a brand new product, significantly enhanced to meet the much more stringent regulations that has some real benefits to the market and end users.

“The manufacturing process for vPlate’s number plates is so significantly different to that currently used and we want to grow the VGroup brand, hence the launch of VPlate.”

However, the exact date the British Standard regulation changes has still to be confirmed.

VGroup International’s chairman Martyn Nash said: “The UK vehicle registration market is dominated by a handful of organisations, but VGroup aims to be different and break that stranglehold by offering a real alternative choice.”

The developments coincide with expansion in the use of cameras to monitor vehicle movements whether through ANPR (Automatic Number Plate Recognition) or to manage entry to the London Congestion Charge zone and next year’s Ultra-Low Emission Zone in the capital, use of the Dartford Crossing and forthcoming Clean Air Zones in towns and cities nationwide.

Mike Wise has been appointed group sales director at vGroup International, following a restructure as the company moves into the next phase of expansion.

VGroup International has restructured its business into five divisions and made a series of new appointments to further strengthen customer service levels and communications with clients.