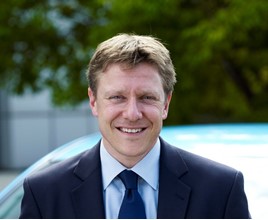 Mazda Motor Europe (MME) has announced that its chief financial officer Colin Maddocks has been promoted to vice president and chief sales finance officer for Europe and North America with immediate effect.

Maddocks will have responsibility for leading the development and implementation of Mazda’s strategy on retail, lease and wholesale finance across all of Mazda’s North American and European businesses, as well as managing the relationships with all current and potential bank partners.

As a result of the new appointment, Giovanni Barbieri, currently director of finance at MME, will be appointed vice president and chief financial officer MME with immediate effect and be responsible for leading the finance function at Mazda Europe.

He joined Mazda in 2006 and has a background in several finance areas at both Mazda Italy and more recently the European headquarters.

Mazda has unveiled its new Mazda3 hatchback which will be rolled out to global markets in early 2019.

Mazda 6 2.2d road test | updated saloon is better than ever

We’ve always been convinced that the Mazda 6 is an excellent company car choice and the latest updates make it better value for money and even more enjoyable to drive.