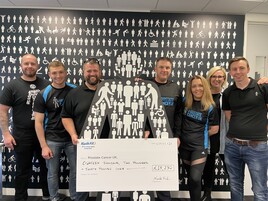 The 53 employees from the company’s fleet and mobile support teams undertook a ‘world tour’ covering a total distance of 25,734 miles.

Staff from Kwik Fit’s offices in Tannochside, Eurocentral Business Park in Lanarkshire, Warrington and Letchworth joined forces and committed to covering at least 25 miles each week, either walking, running, swimming, cycling or rowing.

Over a 14-week period they covered a combined total distance equivalent to a round the world trip starting and ending in the company’s Tannochside offices near Glasgow.

Although the majority of the global journey was virtual, with the employees covering the distances close to home, they were able to take in some more adventurous miles including hikes in the Scottish Highlands as well as Snowdonia and the Brecon Beacons in Wales and along the Cornish coast.

Prostate Cancer UK’s iconic ‘Man of Men’, which represents everyone in the fight against prostate cancer, joined the team in locations such as Land’s End, Blackpool Tower and London’s Piccadilly Circus.

“We didn’t let travel restrictions get in the way of going as far as we could, and we’ve covered a round the world distance.

“In this activity we have raised over £18,000 and I am very proud of the team and their efforts, as this will both help raise awareness and directly support men and families impacted by prostate cancer.”

The journey culminated at Prostate Cancer UK’s London offices, where members of the team presented the charity with the cheque for more than £18,000.

This year is Kwik Fit’s 50th anniversary, and it is partnering with the leading men’s health charity, Prostate Cancer UK to raise funds and awareness of a disease which affects one in eight men in the UK.

Nicola Tallett, director of fundraising and supporter engagement at Prostate Cancer UK, said: “We’re so grateful for Kwik Fit’s commitment in helping raise awareness of the disease and funds for lifesaving research and support services, and we look forward to working with them on future initiatives in our drive to make prostate cancer a disease that men no longer fear.”

The Kwik Fit team would like to thank all the individuals and corporate clients who supported them, as well as industry partner companies including On Board Power, Cages, UK Calibrations, Euro Carparts, The Parts Alliance, Fortron, Mid Kent Metals, INS Garage Assist and Butts of Bawtry.

Anyone wishing to make a further donation to the effort can do so online at the team’s world tour fundraising page.

Tyre retailer Kwik Fit has introduced social distancing measures for its mobile fleet operators as interest in the service has risen due to coronavirus.

Risk of 1.1 million unroadworthy vehicles returning to the roads, according to Kwik Fit

New research by Kwik Fit has revealed that almost 1.1 million unroadworthy vehicles are set to return to the roads as lockdown begins to ease.