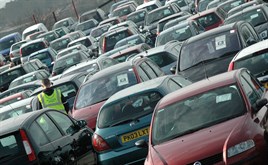 Last month’s figure was achieved despite an increase in the average age of vehicles from 50 to 52 months over the year, although average age has declined to a 12-month low of 58,592 miles.

“However, while overall prices achieved at auction remain strong, we are seeing a tightening of the market, with fleets having to work harder to achieve top book values.

“We’re increasingly seeing that additional investment in pre-sale activities such as body repairs and other cosmetic improvements are paying off right now.”

Adrian Kelly, director of operations (south) at Manheim, said the supply of fleet cars to the wholesale market was down by around 10% year-on-year, which was a further reflection of the fall in new car sales to corporates in the recession years from 2008.

However, he said: “Today’s fleet car is not the same as it was three or four years ago. As many companies have cut back on the options being offered to their fleet drivers, there is now little to differentiate in spec between an ex-fleet and ex-dealer vehicle.”

That means leasing companies must be on the ball, and he added: “Values are high for the right kind of vehicle. A thorough review of the marketplace, combined with a programme to ensure stock is retail ready, is the best way to ensure high values at auction.

“Conversely, if you go to auction without spending the time and money getting the grade right on the stock, then you are unlikely to reach the values you are looking for.”

Alex Wright, managing director of Shoreham Vehicle Auctions, said that with the market ‘buoyant and robust’ leasing companies must cement relationships with auction houses to ensure they remained in a position of strength during periods when the market wasn’t performing so well.

He said: “During hard times, traders will be more likely to buy according to vendor than vehicle. Vendors who have proved to be trustworthy, helpful and honest with their vehicle descriptions will be the ones who will continue to attract buyers when the market endures difficulties.

“For leasing companies, creating a loyal buyer base among buyers now is a priority and that is achieved through the auction house.

“In practical terms this means always being helpful to the rostrum representative, trying to provide materials to help strengthen the price of each vehicle such as vehicle documents, spare keys and being completely honest about any damage.”

It’s a view shared by Henstock, who added: “Sellers should work closely with their remarketing partners to evaluate and interpret the wider market picture and make sure there is not an over-reliance on guide valuations in exclusion to everything else.”

But there was a word of warning from Woodward: “Retail demand is still not that strong, especially on higher mileage cars, and wholesale values are not quite as high as some of the guides are suggesting. We are still seeing good conversion rates but only where vendors are realistic about reserves. If you stick out for too much money, it won’t sell.”

John Davies, chairman of the VRA, agreed saying: “Older cars are coming back in a poorer condition, commensurate with their increased age and mileage. This, accordingly, is putting particular pressure on fleet sector prices where additional refurbishment is required, resulting in slightly lower average residual values. Buyers have also reported a marked reduction in the number of vehicles which are realistically ready for retail.”

But, he added: “As long as good provenance practice prevails, such as ensuring vehicles have spare keys, service records, MoT certificates and other relevant documentation present, then conversion rates and sales values for vehicles in clean condition should remain high during 2013.”

Highlighting a possible toughening market for ex-fleet stock, Scott Holland, strategic remarketing and supply manager, Hitachi Capital Vehicle Solutions, said it was partly due to an oversupply of low emission vehicles that were similar to each other.

Holland said: “The used market has yet to appreciate the associated benefits that a low CO2 car can bring such as lower Vehicle Excise Duty and improved fuel consumption.

“This issue is likely to remain as more and more low CO2 cars come back to the market over the coming years. The right colour and higher level of specification will become even more important in the future to ensure a car stands out at auction.”

As a result, he said: “We are spending more time ensuring we offer a good mix of cars at auctions to ensure we retain our strong following with buyers. We are making sure we make buyers aware of the full list of specification and options fitted to each car, especially the low CO2 models, to ensure the higher specification stock has a chance of making more money and selling first time.

“Buyers are often only buying cars that are ready for them to retail that they can turn into cash quickly so we are working on ensuring the right cars age and mileage of cars have any damaged repaired before sending them to auction. The aim is to maximise conversion rates and prices.”