SMR is 'poor relation' in the leasing budget 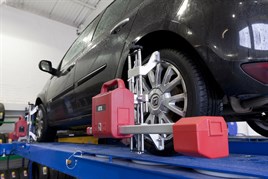 It is a view shared by Denis Keenan, managing director of KeeResources, who said: “Extension of mileage is adding a lot to the maintenance bill, but residual values have been improving so some of the additional revenue spent on maintenance costs is being disguised. However, the higher level of maintenance is not that critical in terms of the overall whole life cost of a vehicle, although it cannot be isolated in its entirety.”

Nevertheless, Fitzgerald argues that the extension of replacement cycles beyond the traditional three years/60,000 miles makes component mortality more subjective as contract hire and leasing companies are dealing with parts that previously didn’t fail during their fleet life.

SMR costs, excluding tyres, have typically reduced in real terms at three years/60,000 miles as manufacturers have moved the replacement of key parts, such as timing belts, up the mileage range.

Keenan, whose organisation provides a wealth of data to the contract hire and leasing industry, says the impact of lengthening replacement cycles - both age and mileage - is influencing SMR costs because, not withstanding greater vehicle and component reliability, there is a  greater period out of warranty for vehicles with ‘standard’ three year cover.

Consequently costs escalate in the fourth year of vehicle operation “quite dramatically”, Keenan says. He calculates that the difference in SMR costs on a four-year-old/60,000 mile car versus a three year old car/60,000 mile model as up to about 35% higher.

Additionally, KeeResources estimates the disparity in cost between SMR at three years/60,000 miles and three years/90,000 miles at an average 1.65-1.75 times with diesel models perhaps as high as 2.25 times.

In real terms the SMR cost difference at those age/mileage parameters was about £40 a month, but that has now increased to perhaps £70-£80 a month as average leasing cycles have increased into a fourth year with the extension of mileage adding significantly to the maintenance bill, according to Keenan.

However, Fitzgerald highlighted: “It is not just the replacement of the OE parts, but it is also the degradation of the component on the second and third replacement cycle which we find is faster than on the first cycle. It can be perhaps by as much as 5-10% fewer miles even if the replacement part is a genuine OEM component.”

He added: “With the ever changing dynamics of the automotive market, SMR budgets continue to evolve in line with technology advances. One thing is clear: the software tools are available, and there is now a plethora of data to assist leasing companies in knowing their costs and being able to take action when something goes wrong.

“With more and more vehicles running over contract, leasing companies are assessing their risk with greater intelligence. Using a pence per mile calculation taken from the traditional cumulative spend of a contracted (or re-contracted) term is no longer concise enough to measure the real ‘cash flow’ expenditure hitting the purchase ledger of annual maintenance budgets.

“More is being spent on replacement tyres, MoTs and general vehicle maintenance as the replacement cycles lengthen. Computer software and good quality data will assist with the downward management of these costs considerably. If it cannot be measured, it cannot be managed.”