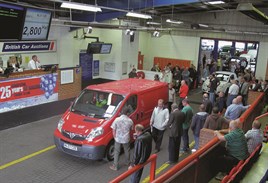 Andy Picton, editor commercial vehicles, Glass’s, says leasing companies must understand when specifying a new vehicle who the van will appeal to in a second life.

He said: “Its condition, mileage, specification and colour are all important factors that need to be thought of at day one and not just at the end of its first life. If, due to its condition and mileage you wouldn’t want to own it, then why would anybody else?

“Often, poor residual values accompany those vehicles that were not suited to a second user’s requirements, leading to that wrongly specified vehicle taking longer to sell and congesting the auction halls and acting as a drag on the used marketplace.

“Good condition, a full service history and reasonable mileage are prerequisites to give a vehicle a chance of maximising value on the open market, along with a modicum of car-like specification such as air condition, satellite navigation and metallic paint, for example.”

He added: “Hopefully, as LCV registrations start to increase over the coming years, the used supply into the market will rise and more adequately reflect demand, which should see residual values ease a little from the strong levels currently seen at auction recently.”

According to Mr Davis, vendors must ‘move with the market’. He explained: “Buyers are favouring car derived vans from a retail perspective because they have multiple uses. Dealers prefer to stock these popular fast turn models so that cash flow can be spread over two or three vans rather than one late and low large van.

“Buyers are hesitant to buy vans and particularly larger vans with higher mileage and increased damage because they have had a longer operational life.”

Nevertheless, it appears that used van buyers must become more aware that those are exactly the type of vehicles that will be increasingly defleeted by leasing companies.

“The recession has given rise to a shift in replacement cycles and five years/100,000 miles is a realistic standard profile for leased vehicles. Operating cycle extension in the recession has shown that modern vans are reliable and that that maintenance costs do not rise significantly,” said Mr Davis.

While the current shortage of good quality stock has resulted in the trade paying more for vehicles, competition has been further intensified by an influx of retail buyers at auction, people that have been made redundant in the recession but are now starting their own business and require an LCV.

That might be a short-term blip or, as Mr Ward said, higher prices in the wholesale sector could have a direct a direct effect on small businesses, partnerships and sole traders - the biggest buyers of used LCVs.

He added: “The shortage of units under five years old could also present a real problem for the wholesale and retail LCV trade who could find it increasingly difficult to source good quality used LCV stock.”

But, that issue could be trumped by growth of demand for flexi-rent vans, which are available for hire without committing customers to long-term contracts.

Explained Mr Davis: “Continuing economic uncertainty in some industry and business sectors mean organisations that historically leased or bought vans are looking to flexi-rent for convenience. Additionally, some businesses continue to find it difficult to obtain finance.

“If vehicle registrations continue as forecasted then there will be a headline increase in van values because younger flexi-rent vehicles will be returning to the market at the expense of older vehicles on longer terms leases with contract hire companies.”

“In simple terms, if the man in the street has no job, job security concerns or a general lack of confidence in the future he either cannot or will not spend. No demand for goods and services equals no requirement for vehicles to move the goods or supply the service.”