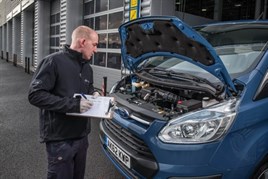 Traditional fleet service, maintenance and repair (SMR) costs can be forecasted down to the final penny at the benchmark three years/60,000 miles - but a raft of ‘grey areas’ fuelled by numerous factors means contract hire and leasing companies continue to build up contingency funds to meet the cost of the unforeseen.

‘Grey areas’ of cost are being created by new in-vehicle technological developments and nervousness as to how much repairs will cost to those components.

However, areas of cost outside of normal SMR budgets are also caused by factors beyond the control of vehicle manufacturers and contract hire companies as well as, drivers, such as the declining condition of the UK’s road network.

Further complicating the SMR equation in recent years is the extension of fleet replacement cycles into unknown territory that have means contract hire and leasing companies have to forecast future costs without the knowledge of historical data.

Add into the mix the trend for manufacturers to stretch service intervals - either to a fixed or variable point - and it means that mechanics are seeing individual vehicles far less frequently, which further adds to contract hire and leasing company nervousness.

However, that must all be balanced against generally ever-increasing vehicle and component reliability as demonstrated by the plethora of fixed price servicing schemes launched by manufacturers, such as Mini’s ‘TLC’ package and warranties now stretching to five or even seven years in the case of Kia.

Stephen Dilley, managing director, of Fleet Influence, one of the leading providers of SMR budgeting and management data to the vehicle leasing sector, said: “Past perception with SMR was one of stability.

“However, in this millennium changes in technology driven by manufacturers’ efforts to stay ahead of competitors and driven by external factors such as legislation and taxation have changed the dynamic.

“The rate of change of engineering improvements has been phenomenal. Manufacturers are changing powertrains so regularly that it is causing everyone involved in SMR to look more closely at costs, but it does create a fear factor.

“In the past manufacturers would produce a single engine type and it would have a long shelf life and be used in many models. Experience, knowledge and history meant costs could be easily calculated, but today there is a fear of the unknown and whether those changes will create additional cost or save money.”

A reservoir of historical SMR data on individual makes and models of vehicles over a wide range of operating cycles is critical for contract hire and leasing to accurately predict future SMR spend.

Andy Smith, business development Manager at Derwent Management Services, whose range of vehicle information products includes SMR BurnRate, said: “A general rule of thumb is that on a typical three year/60,000 mile contract with ‘normal’ servicing patterns year one equals a third of the maintenance budget; year two equals two thirds of the budget and year three equals three thirds of the budget.”

Over the years the range of components that influence projected maintenance spend have not changed hugely, according to Smith.

However, that is starting to change with growing demand for a range of hybrid and electric vehicles. Smith said: “There is no historical information on which to base judgements to get an idea on the SMR cost of these technologies.”