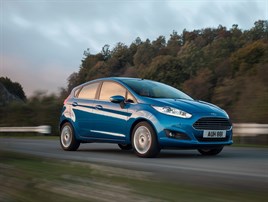 The figures are supplied by the Society of Motor Manufacturers and Traders which compiles stats provided by the manufacturers themselves. But behind the headline figures are numerous sub divisions, segments and categories which tell the real story of success in the corporate market.

At a basic level, fleet registrations are divided into four core sections: true fleet, which include sales to end user fleets and leasing companies, Motability, daily rental and captives, primarily cars registered by a manufacturer or sold to its staff under an employee scheme.

Take a typical annual new car market of two million. Fleet accounts for roughly half. Of those one million new cars, around 200,000 go to Motability. A further 200,000 are daily rental while captives account for around 70,000.

Taking true fleet in isolation, which ended 2012 on around 515,000 cars, Volkswagen heads the table, ahead of Audi, Ford and BMW. Then there’s a gap to Mercedes-Benz and Vauxhall, closely scrapping it out for fifth place.

These are genuine company car sales to fleets, although even here a note of caution is required. True fleet also includes cars registered as courtesy cars to bodyshops – estimated at around 45,000. Indeed, delve deeper and a whole different set of categories come to light.

Leasing company, core fleet and business (SMEs) – all these are genuine categories that cars designated as a fleet purchase are allocated to.

Is all this important? Putting to one side the true fleet category, it is important for leasing companies and the pricing guides to understand where manufacturers are registering cars.

Every year certain manufacturers will outline a sales strategy where registrations to rental companies will reduce in a bid to better control and strengthen residual values. However, these are often empty promises: the figures reveal little or no change in the volume going into short-term rental.

Vauxhall, which registers the most rental cars, has certainly bucked this trend in the past two years. Fleet director James Taylor pledged to remove 20,000 units last year and the figures show he has largely delivered.

Despite market pressures from a stagnant fleet sector, Vauxhall removed 15,000 units in 2012 (on top of the 6,000 removed in 2011). Fleet director James Taylor estimates the impact on three-year values could be worth a couple of hundred pounds by taking this action.

Among those picking up rental market share include all four main Volkswagen Group brands – Audi, Seat, Skoda and Volkswagen – and the Korean twins, Hyundai and Kia.

However, these figures should be taken in the context of rising fleet sales and private sales – each of those brands is performing solidly in the other key market sectors, which should lessen the impact of a big rise in rental.

In addition, residual values are also all about demand in the used market. BMW sales have increased by a huge amount in all sectors over the past six years, for instance, but its residuals remain high because its cars are in demand by second hand car buyers.

If there’s a willing market when the cars are de-fleeted, whether at six months, 12 months or three years, prices will be robust.

Some manufacturers use the rental and captives segments to off-load cars near end of month in order to hit their targets. It’s preferable to having an awkward conversation with head office.

As a former fleet director for one of the big fleet players once told me: “If it looks like I may not hit my figures this month, all I have to do is phone one of the rental companies and ask them to take a few hundred extra cars.”

There is nothing wrong with pushing “a few hundred extra cars” out to rental at the end of a month as long as – once again - this additional supply does not exceed demand in the used car market when these vehicles are de-fleeted.

At the moment, franchised dealers are desperate for good quality nearly-new stock, so residuals are holding up well for most manufacturers.

However, take it too far and this action will inevitably de-stabilise short-cycle residual values with an inevitable knock-on effect down the line. Once it hits three and four year values – the fleet heartland – leasing companies feel the pain as their pricing predictions exceed actual re-sale values.

And they are likely to be more cautious in future, resulting in higher leasing rates until the manufacturer can show it has changed policy. That can take some time.

Motability is less of a concern. With fixed three-year contracts and a robust remarketing programme, the national charity is able to achieve strong residuals. These registrations for manufacturers might be low profit, high cost deals, but the pain is felt at the front end and not when they return to market.

So who are the true fleet winners and which manufacturers are over-exposed in the rental sector?

Volkswagen has been the long-time leader in true fleet thanks to its combination of high quality, desirable cars combined with low running costs and CO2 emissions. Interestingly, though, the company’s own figures show that Ford overtook it last year – presumably when bodyshop sales were removed from the total.

Ford’s rise of almost 3% sounds small but is still impressive from such a massive brand, testament to the quality of its cars, its low CO2 emissions and competitive total cost of ownership figures.

Hyundai saw the biggest uplift of 38% as its models continue to find favour among company car buyers. Notable growth also came from its sister company Kia, up 23%, and Honda, up 34%, which is making resurgence in fleet on the back of the Civic.

No company that increased rental sales substantially last year in percentage terms saw this unduly unbalance their sales. Take Citroen: its rental sales rose by 250% but it was from a low base in 2011 and the growth was matched in volume terms by sales to both the business and leasing sectors.

Most manufacturers had their sales balance under reasonable control last year, helped by the strong retail market - plus a bit of pre-registering to bloat the figures.