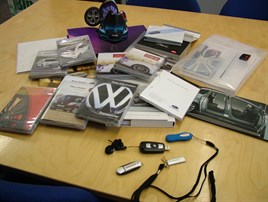 Our part of the car industry has been focused on low-CO2 and carbon footprints for somewhat longer than the retail market.

Yes, CO2 emissions of cars are required by law to be published, but your ordinary punters buying new cars probably never gave them a second glance until a couple of years ago.

Taxation has focused the buying habits of fleets for many years.

And as well as the measurement of tailpipe CO2 emissions, it may be possible to find out the more inclusive ‘well-to-wheel’ CO2 emissions figure, including the carbon cost of producing the type of fuel used.

But no one seems to have factored in the carbon cost of the material we are given as journalists (and perhaps some of us demand) to refer to when writing up our driving impressions.

It can vary from manufacturer to manufacturer, but in my opinion anyone writing about new cars today should not need to view any material in print.

More often than not, on a press launch of a new vehicle we are given a USB drive with the relevant information on, but too often this is accompanied by paper too.

Then there are CDs, sometimes secreted within hard-backed paper press packs, and sometimes in a DVD-type plastic case. And occasionally we are given all three. And other times we are sent repeats.

For example it isn’t unusual to attend a press launch in the UK, pick up a press pack on the vehicle and be sent one through the post. Or two.

We publish Small Fleet Review as well as Fleet News and it wouldn’t surprise me if each publication was sent its own press pack. In my previous job at Parker’s we were sent up to three – one for the website, one for Parker’s Car Price Guide and one for Parker’s Car Chooser (which hasn’t been published since 2006).

I was once sent an attendance confirmation inscribed in a piece of aluminium, enclosed in a leather wallet. Is it right to plunder the earth’s finite resources in this way?

Then when you get around to borrowing one of these vehicles to test, very often they come with the same material that we already had from the launch or were sent in the post when the car went on sale.

Many car manufacturers in the UK have a media contact database in the UK numbering in the thousands so the amount of material produced to send us is pretty significant.

The irony is that for the switched-on car manufacturers, all this material is already available to read or download for the media through password-protected websites.

Car manufacturers have found it tough in the recession and it will be a long time before business returns to pre-recession levels.

I wonder how much cash they would save by keeping press material restricted to some kind of electronic form, with perhaps a USB stick back-up for those of us too dim-witted to find our way around the internet.

It seems rather hollow to continue to claiming reductions in CO2 with all this waste being produced at the same time.