Future vehicles: No hover boards but electric vehicles are tech of next 30 years 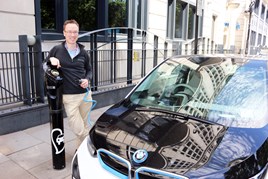 Erik Fairbairn, CEO, POD Point, looks at the vehicles of the future.

We might not all have access to efficient clean and green transport as readily as the characters in Back to the Future II but efficient and green technology is on its way to becoming more of a reality from everyone.

While not everyone in the UK has access to efficient clean and green transport as readily as the characters in Back to the Future II yet this technology is already here for many. The electric vehicle industry is growing quickly and there are tens of thousands of drivers nationwide with the number growing yearly as more and more innovative new vehicles become available.

What we’re experiencing today is the first generation of Electric vehicles, and already they are able to do 250 miles on a single charge, and 0-60 in 3 seconds. One of the big barriers to ownership is a lack of charging infrastructure but this is a problem we’re trying to solve at POD Point.

When looking to the future a lot of people talk about wireless charging but the idea of this technology being applicable to electric vehicles anytime soon is utter rubbish. Your electric toothbrush charges wirelessly. a small number of phones charge wirelessly. These devices are charging at the mW level. Electric cars need to charge at the kW level - It is an enormous difference.

There could be some real positives for clean transport in the wake of the VW dieselgate scandal in that government interest in the sector may increase and vehicle manufacturers will start to focus on producing electric models more keenly. While government incentives may stimulate adoption in the short term and are welcomed, ultimately it is commercial viability (making charging commercially viable) that will be the driver behind sustainable growth in the sector.

I imagine in 30 years we’ll all be experiencing a much cleaner, greener and cheaper generation of electric transport.