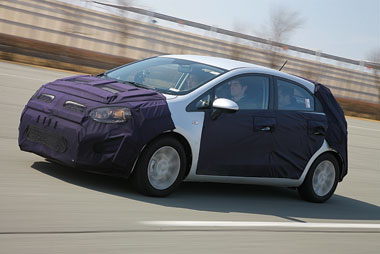 Officials at Kia have yet to decide if they will make Europe’s cleanest car available in Britain.

With a three-cylinder, 1.1-litre diesel engine under its bonnet, the next-generation Rio supermini model has record tailpipe emissions of 85g/km and 88.28mpg average economy.

But the cost of the technology involved in achieving the pace-setting performance will ultimately determine whether UK fleets have the opportunity to select this model.

Kia has four power units to choose from, including another diesel with four cylinders. At 1.4-litres, this model also has strong eco credentials with 94g/km emissions and 80.7mpg.

“While we’re keen to include the record-breaking engine in our line-up, the amount of the premium the factory will want to charge for it is likely to be the deciding factor,” said Kia Motors UK spokesman Steve Kitson.

At the right price, the 85g/km car will appeal to fleets such as local authorities, health authorities and those in service industries who travel high annual mileages within local areas.

High mileages make the costlier diesel a viable option as the greater expense can be recouped through lower fuel bills over the contract term. Expect it to feature in the UK.

Like other three-cylinder cars, it emits a steady, distinctive beat on idle. It takes a leisurely 16.4 seconds to reach the benchmark 62mph rate, but it is notably quiet under acceleration, and smooth and refined throughout its rev range.

Spinning out 69bhp at 4,000 revs and developing 119lb-ft torque from 1,750 revs, the most miserly version of the Rio cruises in near silence in a high sixth gear.

Due on sale in June, the car is longer, wider and lower than its predecessor while the longer wheelbase allows much greater space for rear-seat occupants.

Specification details have yet to be announced but the car is expected to be priced from £10,000 (for the entry-level 1.4-litre petrol) and maintain Kia’s three-grade trim policy.