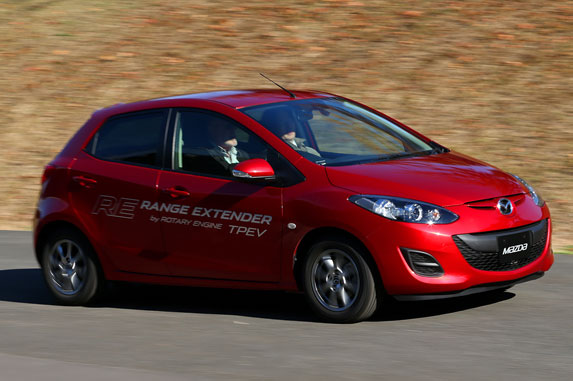 A little like Mark Twain’s first obituary, it would seem reports of the death of the rotary engine have been exaggerated.

Mazda is far from finished with this unique engine design and has strongly hinted there will be an all-new RX sports car in the near future. In the meantime, there is also another new rotary engine from the manufacturer and it’s being used as part of a range-extender pack for the Mazda2 supermini.

Fleet News was among the first to try the Mazda2 EV range extender, which could be on its way to the UK in 2020.

At first sight, it looks like any other Mazda2, but closer inspection reveals a deeper rear bumper to shroud the range extender pack that sits where you’d normally expect to find a petrol tank.

This gives a clue to how small the range extender package is, helped by the compact nature of rotary engine design.

The 330cc rotary engine produces 26bhp and, like the range extender motors in the BMW i3 or Vauxhall Ampera, it works as a generator to charge the battery rather than driving the wheels directly.

Power for the wheels comes from a 100hp electric motor mounted where the engine would normally reside and drives the front wheels directly.

In total, the range extender technology in the Mazda2 EV tips the scales at 100kg, and performance is very similar to a 1.5-litre version of Mazda’s supermini. However, CO2 emissions are estimated at 15g/km by Mazda, though it has yet to confirm exact emissions data.

That puts the Mazda2 EV on a par with the BMW i3 Range Extender. The Mazda comes with a nine-litre fuel tank and gives this car an estimated range of 250 miles per fill.

Unlike other range extenders we’ve tried so far, the Mazda2 EV’s petrol engine switches on automatically as soon as the car goes above 6mph to start charging the battery rather than waiting for the battery’s charges to fall below a pre-set point.

By running in this way and at ideal revs, Mazda says this addresses any concerns about fuel and oil consumption with rotary engines.

The rotary engine is only just audible while driving and is little more noticeable than a BMW i3’s twin-cylinder motor, though it must be remembered the Mazda2 EV we tried is very much a prototype rather than a finished production car.

However, it offers a fascinating insight into Mazda’s future development, especially as the manufacturer openly admits the range extender pack can be easily installed in almost any of its existing range of cars and those still to be launched with Skyactiv technology between now and 2016.

During our brief test drive, the additional weight of the range extender pack didn’t appear to blunt performance compared to a Mazda2 1.5 with automatic gearbox.

Firmer rear suspension is fitted to the EV to cope with the extra heft of the RE pack, but this has little effect on ride comfort.

Just as importantly, the smoothness of the electric motor and the seamless way the RE motor comes into play mean the Mazda2 EV is as easy and simple to drive as an automatic gearbox-equipped supermini.

This bodes very well for the future of the car and the wider applications of Mazda’s range extender technology.

While we may not see the Mazda2 EV in this form in the UK, it is a very clever, compact and appealing approach to range extender technology.

It also keeps the rotary engine alive and developing.