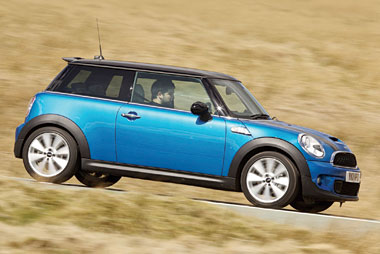 Mini has gradually brought customers round to accepting diesel as part of its range.

The first Mini One D used a Toyota-sourced 90bhp 1.4-litre engine. Then for the second-generation Mini there was the Mini Cooper D, which used a Ford-PSA 110bhp 1.6-litre.

Now Mini is making a high-performance diesel version available with a 2.0-litre 143bhp engine with hatchback, Clubman, Countryman and Convertible models, all wearing an SD badge.

Looks-wise there’s no difference between the SD and the Cooper S, although a sport pack is available on the hatchback and Convertible to give the look and feel of the top-of-the-range John Cooper Works.

For anyone still doubting the performance appeal of diesel, the SD has a higher torque output than the John Cooper Works

The hatchback can reach a top speed of 134mph and has a 0-62mph acceleration time of 8.1 seconds – a second quicker than the petrol-engined Mini Cooper hatchback and just 1.1 seconds adrift of the petrol Cooper S.

Press the sport button and the steering becomes firmer and the pedal more reactive.

Of course the appeal for fleet managers and cost conscience drivers is that the SD offers low CO2 emissions and good fuel economy.

It achieves this through its ‘minimalism’ features such as brake energy regeneration, auto stop/start, shift point display and electric power steering.

The hatchback, Clubman and Convertible all have sub-120g/km emissions while the highest emitting in the range – the Countryman All4 – emits 130g/km.

The hatchback has a combined fuel consumption figure of 65.7mpg.

There’s plenty of apps to appeal to iPhone users as part of the media pack.

The Minimalism Analyser, for instance, can monitor gear changes, braking and acceleration. There are star ratings and tutorials for each and drivers can see how they rank against other users.

There’s also a Mini Emergency Service app which allows drivers to request roadside assistance and track where the technician is.

Functions are restricted when driving but from the fleet manager’s point of view this still raises the issue of drivers being distracted behind the wheel.