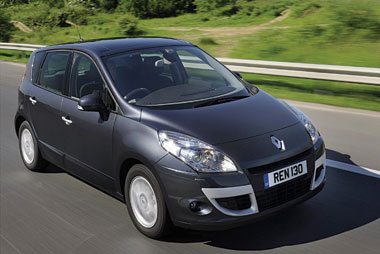 Less will mean more when a groundbreaking diesel engine fires up two more versions of familiar Renault family cars in the next few weeks.

Developed as part of a bid to win pole position in the race to reduce tailpipe emissions, the first of a new range of eco motors is set to allow the French manufacturer to promote its mid-size, multi-purpose models as the most efficient products of their kind.

Available in the UK from July, the Scenic and Grand Scenic are first to offer the trailblazing technology behind Energy dCi 130, the world’s most powerful 1.6-litre unit.

Developed over five years at a cost of more than €230 million (£200 million), the motor matches the 1.9-litre engine it will replace in producing 130bhp, but develops greater torque while also dramatically cutting fuel consumption and CO2 emissions.

A landmark in powertrain engineering, it gives the Scenic duo combined economy of more than 64mpg and emissions figures of 115g/km – a combination company officials believe will be welcomed by fleet and corporate car users.

Speaking at the media launch of the new models, company marketing chief Vincent Carre revealed the Energy unit will power four Megane models next year with adaptations to follow in the Master van and next-generation Laguna.

“It will be used by C-segment Nissan vehicles and talks are underway regarding its use by Daimler, our technology partner,” he said.

As well as replacing the ageing 1.9-litre unit, the Energy will ultimately make Renault’s relatively new 2.0-litre diesel redundant as downsizing gathers pace, but drivers will be hard put to notice the difference from a powerplant that packs remarkable punch with impressive smoothness and refinement.

Fifty per cent quieter than the 1.9, it sounds almost like a petrol unit on idle and remains impressively muted right up to its limit of 5,200rpm.

With a seamless flow of power, the 130bhp motor is a delight to drive. As lusty as a 2.0-litre, it spins freely through its range and oozes refinement.

It gives the Scenic a huge boost with a remarkable blend of class-leading power and class-above refinement.