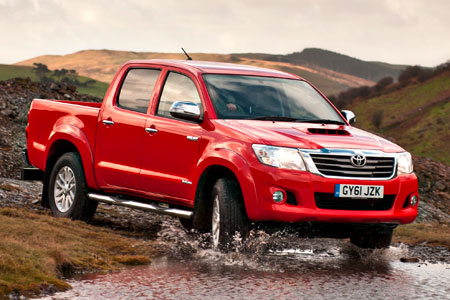 The Toyota Hilux seems to have been part of the commercial vehicle scene for longer than many of us have been around.

The current Hilux is the sixth-generation model, introduced in 2006, and has been given a thorough refresh for 2012 with a new look and Euro 5 compliant engines.

To achieve Euro 5 levels, both are now fitted with a diesel particulate filter. Improvements in fuel consumption (and CO2 emissions) arrive with these engine changes (the 2.5 D-4D now sneaks under 200g/km), as well as a smartened interior and new exterior fittings.

A five-speed manual transmission is standard across the range, with a five-speed auto an option on 3.0 D-4D variants.

A bolder front-end design and integrated indicator repeaters in the door mirrors distinguish the 2012 model, while inside there is the introduction of the Toyota Touch multimedia interface standard on HL3 and Invincible equipment grades. It controls audio, Bluetooth and telephone controls, and can be upgraded to Toyota Touch & Go navigation and local information service.

The Hilux has always felt one of the more business-like of the pick-up trucks on sale, without seeming to target the retail market as much as others have.

It comes with all the important features a fleet operator will need.

Toyota’s Automatic Disconnecting Differential (ADD) is fitted as standard to all models. This automatically engages or disengages the front axle drivetrain with the shift from four to two-wheel drive, contributing to fuel efficiency and lower noise levels in 2WD mode.

A rear diff lock is standard on all models with the 2.5 D-4D engine (those more typical of being a fleet workhorse, but not our 3.0 D-4D test vehicle), further improving off-road capability. It is activated via a button on the dashboard.

A sixth gear would allow the Hilux to cruise more quietly on the motorway (not that this is the ideal environment for any pick-up truck) and, although there’s independent suspension up front, it’s still a bit unwieldy.

Although the Hilux feels more up to date, and performs as well as ever, it still can’t compete on kerbside appeal with rivals such as the Volkswagen Amarok and new Ford Ranger.