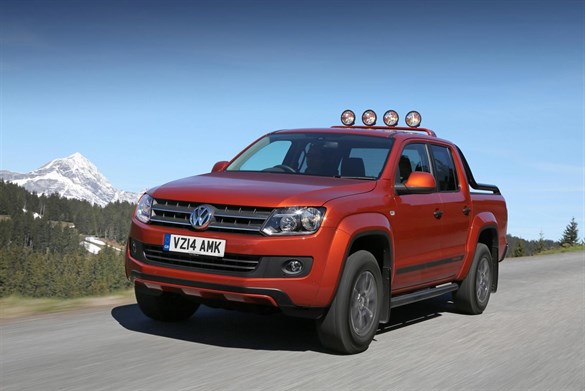 About 10 years ago, the double-cab pick-up market in the UK was reaching its peak.

The CO2-based company car tax was starting to bite as people carried over inefficient and high-BIK SUVs into the new rules. While they may have been taxed at 25% or 15% under the old mileage-based system, the new rate went up to 35% and many people were looking for an escape route.

However, BIK tax on private use of commercial vehicles was based on a flat £500 rate at the time, so there was potential to save thousands of pounds a year by switching to a pick-up.

But within a few years, the loophole had closed and many people were thinking twice about choosing a second company ‘car’ with leaf-spring suspension, off-road chassis and a low-range gearbox that was never used.

The market for double-cabs subsided and it seemed businesses were only choosing them if they really needed them.

Volkswagen entered the double-cab market three years ago with the Amarok, and while it is capable and brought new levels of interior quality to the sector, restricted early supply in the UK meant it failed to make the impression it deserved.

Now the vehicle has a greater presence, with 350 of the limited edition models available to buy this year, giving it the potential to attract more attention.

The Amarok Canyon offers a luxury car interior with pick-up capability. Just 50 will be available with a manual transmission (and selectable four-wheel drive), while 300 will come with an eight-speed automatic (and full-time four-wheel drive).

Three colour options are available, but I’ve only ever seen the copper orange colour of our test vehicle. We also had an optional roof-mounted light bar, giving it a safari vehicle feel.

The only engine available is the BiTDI 180hp 2.0-litre diesel that sits at the top of Volkswagen’s commercial vehicle range and it is both strong and refined.

Prices for the automatic version tested are £30,720 (excluding VAT), and the gearbox allows more engine torque than the manual, and is a little more efficient on the urban test cycle. The combined figure for both is 34.4mpg.

The Amarok Canyon comes with leather seats, electronic climate control, satellite navigation and most of the features you’d find in a £30,000 car. You compromise on on-road behaviour because of the its size and mass, but it is still an enjoyable vehicle to travel in because of the high seating position and its smooth power delivery.

While it might not be the vehicle to persuade someone to give up their BMW X3 or Audi Q5, its  eye-catching looks and the fact that it feels far more sophisticated than the pick-up trucks of a decade ago mean that for the right business, it wouldn’t be an outrageous choice for the company car driver.