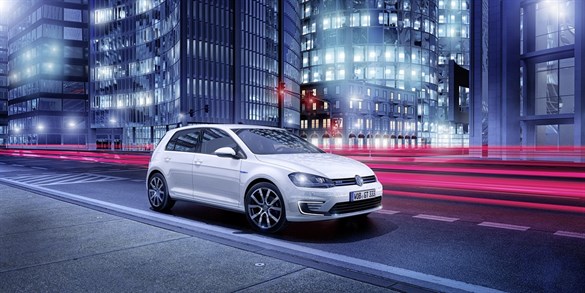 The stats of the new Volkswagen Golf GTE is seem to place it directly in the utopian future of everyday performance motoring: 204hp, 35g/km and 188mpg. It’s difficult not to shout that latter figure aloud in the style of Back To The Future’s Doc Brown.

But 188mpg is about as likely to happen as time travel. And in fairness to Volkswagen, the company admits it – those figures come from the industry standard test for plug-in electric hybrids, which stipulates driving 1/3 of the time in hybrid mode and 2/3 using electric power only.

In the real world, Volkswagen postulates a 580-mile range from the GTE’s 40-litre petrol tank. Not revolutionary, agreed, but set against the performance of this car, very impressive indeed: when the petrol and electric motors combine, 0-62mph comes in 7.6 seconds.

But what’s most alluring about the Golf GTE is its willingness not to rely on the petrol engine at all, unlike a lot of hybrid cars whose electric-only ranges seem to have been homologated in gravity-free environments.

The GTE has a 31-mile electric range at speeds up to 81mph, meaning it’s perfectly plausible to run daily errands without ever dipping into the petrol tank; plugging the GTE into a household socket will charge it from empty in just 3.5 hours, or 2.5 using a wall box.

The sophisticated drivetrain, which includes a DSG automatic as standard, switches seamlessly between electric-only mode, hybrid mode (where both motors work together at their most efficient) and ‘GTE’ mode, which essentially employs the electric motor as a booster to the petrol engine. In this mode the GTE feels utterly rapid – quicker than the performance figures suggest.

But it’s really the combination of GTI-inspired looks (with red accents replaced by blue) and the near-silence of the petrol-electric drivetrain that makes this a very appealing package; it’s easy to forget how much engineering nous it takes to make a turbo petrol engine, an electric motor, a battery pack, a twin-clutch automatic gearbox and energy-capturing brakes work together in such smooth, unobtrusive fashion.

Forget the hot hatch shtick and the Golf GTE is one of the most refined, economical family hatchbacks there is.

In pure cost terms, however, the Golf GTE is actually a bit of a mixed bag. Its CO2 rating makes it VED-free and puts it in the 5% BIK bracket, meaning low personal tax and low employer national insurance contributions, but even after the £5,000 plug-in car grant, its P11D value is £28,000. Driven enthusiastically, the GTE is also likely to return real world fuel costs akin to the diesel Golf GTD.

And given that the battery pack uses up about one third of a regular Golf’s book space, there’s a packaging deficiency to consider, too.