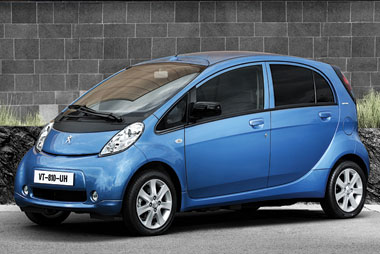 Peugeot’s Ion is a sister vehicle to the Mitsubishi i-Miev and Citroën C-Zero – a fully electric city car.

The French company’s sales strategy differs from Mitsubishi’s as Peugeot hopes to lease all of its Ions through its own contract hire division.

Prices have been set at £415 a month, inclusive of servicing and maintenance, over four years/40,000 miles, and Peugeot also has a plan to lease used versions at four years old for a further four years at a reduced rate.

The four-seater will go on sale in 2011 and drivers will benefit from the five-year benefit-in-kind tax holiday currently applied to electric vehicles.

The Ion can be charged from a standard UK electricity supply, or a more expensive fast-charging unit.
The standard charge takes up to eight hours, while a fast charging unit can deliver 80% capacity in 30 minutes.

A full charge in the UK should cost less than £2, giving the Ion a theoretical range of up to 100 miles, depending on how it’s driven and the drain on the battery of other systems in the car.

We’ve driven a prototype version of the i-Miev previously and we’re pleased to report that the Ion has a better finish inside, although still not quite at the level you’d expect for a car whose Mitsubishi-badged relative is priced at almost £29,000 before the Government’s £5,000 subsidy is applied.

Peugeot claims an advantage over the i-Miev in terms of range thanks to improved aerodynamics, enhanced regenerative braking and through allowing the battery to run to just 5% of capacity before requiring recharging instead of Mitsubishi’s preferred 10%.

The Ion feels agile on the road thanks to the battery under the floor contributing to a low centre of gravity. With 133lb-ft or torque available instantaneously and rear-wheel drive, it feels nippy about town and is easy to drive.