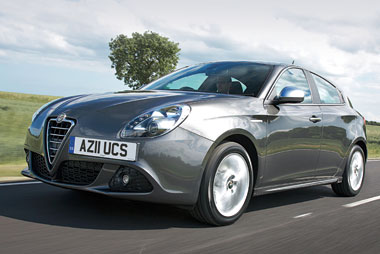 With a strong heritage in performance cars and racing, Alfa Romeo was one of the car manufacturers caught off-guard when the UK decided to adopt CO2 emissions as a basis for taxing company car drivers in 2002.

Famed for exquisite sounding and performing petrol engines, CO2 emissions and fuel consumption were two of the reasons the brand disappeared off the fleet map during the past 10 years.

Another was a dealer network that seemed disinterested in sorting problems, which was frustrating when it led to downtime through unreliable cars.

Alfa Romeo worked hard at tackling quality issues both in production and in its dealer network, and more recently has focused on adding more fleet-friendly models to its range.

The Giulietta, launched in 2010, targets cars like the Volkswagen Golf and Audi A3 Sportback as it tries to lure user-choosers with its styling and character.

And it does so while being ultra-competitive with rivals on fuel consumption and CO2 emissions, and without compromising performance.

Two versions of the 2.0-litre JTDM diesel are available, one with 140bhp and another with 170bhp. Both have emissions below 130g/km.

We tried the higher power version, which puts the Alfa deep into Volkswagen Golf GTD territory, and on price and performance also matches the most powerful diesel Audi A3 Sportback, and the ultra-efficient Vauxhall Astra 2.0 CDTi Ecoflex.

The Giulietta certainly raises the stakes for style. Its distinctive front end makes it stand out while LED strips help define its ‘face’ while sleek rear LED lights also make its recognisable from behind.

Inside the Giulietta is surprisingly spacious, although there is plenty to remind occupants of the sporty heritage of the brand, including the three-spoke steering wheel and metallic-finish gearknob and pedals.

The dashboard is an ergonomic nightmare, with the large speedometer and rev-counter pushed to either side and the central information display and smaller temperature gauge and fuel gauge in the driver’s line of vision.

Nor does it feel as polished inside as a Golf or Astra.

A few too many hard plastic sections of the dashboard and doors spoil the premium feel Alfa Romeo clearly wants.
The Giulietta comes with Alfa Romeo’s selectable DNA system, which can vary the throttle response, steering assistance and damper settings according to conditions. ‘A ‘ is all weather; ‘N’ is normal; ‘D’ is dynamic.

Despite offering 170bhp, the Giulietta still feels a little flat unless ‘D’ is selected, and then it feels every inch a hot hatchback.

But the best news is that it achieves it with competitive fuel consumption and emissions, which is now becoming the norm for Alfa Romeo.