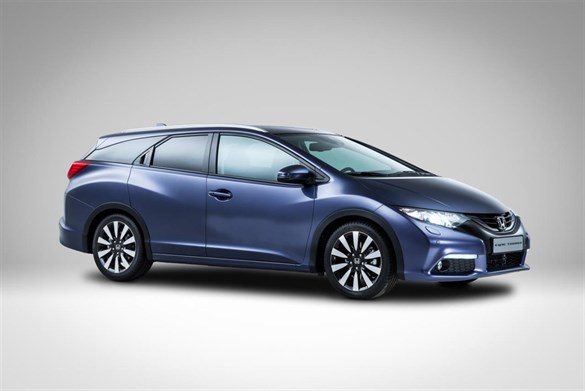 One of the cars you probably haven’t seen much of lately is the Honda Accord. While it’s still on sale, a long period with an unfavourable exchange rate for the Japanese-built car took away any impetus behind promoting it.

Add to that the lacklustre 2011 facelift, where CO2 emissions were reduced but failed to keep pace with rivals, it is easy to understand why it has all but disappeared from new car registrations.

In this era when downsizing is both encouraged and rewarded (often with lower running costs), Honda has given potential customers an alternative in the Civic Tourer.

Like other Civic models, the Tourer is built in the UK so UK (and European) sales aren’t exposed to currency fluctuations with the Japanese yen.

It is available with Honda’s 1.6-litre diesel engine (dubbed Earth Dreams Technology), which has superseded the 2.2-litre diesel in the Civic range.

As it’s so much lighter than the larger engine and has only a small torque deficit, there is no great loss of performance from choosing the 1.6 i-DTEC.

In S and SE models, the engine offers CO2 emissions of 99g/km, but higher-spec models such as our EX Plus test car are slightly higher at 103g/km, ruling these models out for fleets with a CO2 emissions cap set at 100g/km as well as adding an annual VED charge to these cars after the first year of ownership.

It’s good to drive. The engine is smooth, refined and responsive and I discovered the car felt sharp enough to select comfort mode in the adaptive damping settings.

The Civic Tourer has an exceptionally large boot both depth and widthways, comfortably exceeding the dimensions and capacity of the larger Accord.
Combined with a large under-floor storage compartment, the volume is 626 litres up to the tonneau cover with the rear seats in place, and an enormous 1,668 litres up to roof height with the rear seats folded.

This ranks it higher than most estates from the sector above, as well as among the very best in the lower medium sector, where the Civic sits.

The EX Plus model provides a huge list of equipment as standard that many might only expect to find on larger cars.

Unfortunately this pushes the price of the car up to more than £27,000, which even on a wholelife cost basis would need a spectacular residual value to compete with less well specified rivals.