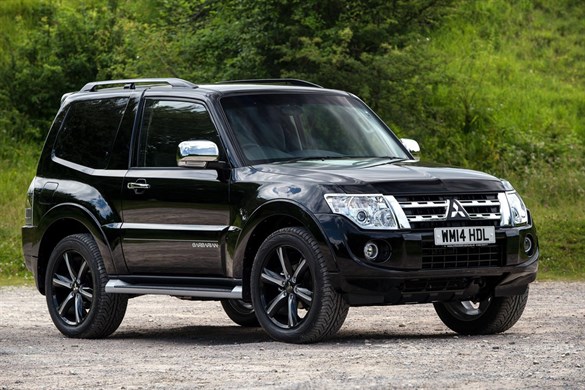 The market for three-door large 4x4s has somewhat diminished in the past decade or so.

With on-road biased SUVs in the ascendancy, those who might have bought a short-wheelbase Nissan Patrol, Toyota Land Cruiser or Mitsubishi Shogun in the past – who perhaps liked the stand-out styling and needed some off-road and towing ability – have a long list of medium and large SUVs to choose from.

The authentic 4x4s are still there, but fewer in three-door form. However, they are still working vehicles and relevant to fleets.

Mitsubishi has recently extended its Barbarian editions (popular in L200 and five-door Shogun models) to encompass the three-door Shogun. It means those choosing the short-wheelbase model can get styling enhancements such as 20-inch gloss-black alloy wheels, carbon effect trim inserts inside, alloy pedal pack and DAB.

The Shogun has undergone something of a revival in the UK over the past 12 months or so. This isn’t through any major advance in technology or ability. In fact, the Shogun is largely the same as the last major revision to the model in 2006, which is fundamentally the same car as was launched in 2000.

But Mitsubishi in the UK has cut prices because of a swing in exchange rates back in favour of sterling. On-the-road prices for SWB versions were reduced by £3,900 while LWB versions were cut by up to £5,000.

The Barbarian version of the three-door Shogun is perhaps more compromised on its off-road ability compared with others, standing on 20-inch wheels with low-profile Yokohama Advan ST tyres, which are designed for performance-oriented SUVs rather than off-roaders.

The interior has leather seats, a Garmin navigation system and electronic climate control. The SWB Shogun is available with an automatic transmission option.

While the interior might seem fairly opulent given the agricultural sounding four-cylinder diesel, it perhaps isn’t the ideal choice for longer journeys as the front seats lack lumbar support. I ended up suffering some lower back pain after a few hours on the road.

For those who need a four-wheel drive car for a very specific purpose, the Shogun still has some life left in it and, perhaps remarkably considering its age, isn’t the least sophisticated choice in this niche.