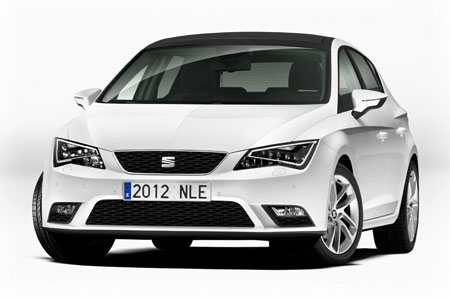 The third-generation of the Seat Leon is lighter and more economical than the car it replaces.

Its exterior follows the design cues debuted in the recently-revised Ibiza supermini and includes full LED headlamps for the very first time.

This gives the Leon a modern and distinctive appearance which should appeal to its target market of younger drivers.

The five-door hatchback is based on the Volkswagen Group’s new MBQ platform which means it also shares engines and equipment with other models in the group.

In fact, the new Leon shares 55% of its components with the new Volkswagen Golf and Audi A3.

The chassis changes that come with this new platform also provide a more refined drive and improved handling.

The Leon is shorter than its predecessor but its wheelbase is 58mm longer to provide more interior space which means it can easily accommodate five adults.

It is also 4mm taller giving greater headroom, and the boot has increased in size by 39 litres to 380 litres.

Engineers have managed to produce a hatchback which is 90kg lighter than its predecessor and this has helped return an impressive official fuel economy figure of 74.3mpg – the same as the most fuel-efficient Ecomotive variant of the previous model.

The new Leon comes in three trim levels: S, SE, and FR. The car on test, the SE 1.6TDI, is fun to drive and the steering is light.

The engine is punchy for its size and cruises well at motorway speeds, despite the absence of a sixth gear.

The interior is quite bland but is vastly improved in terms of its feel and the quality of materials compared to the previous Leon.

Standard specification is also good with Bluetooth and a five-inch touchscreen fitted.

The controls are clear and simple to use, and the operating system is intuitive. There’s no need to read the manual.

A technology pack which includes full LED headlights, DAB radio and a navigation system is available at a discounted rate of £500 until June 30.

The 99g/km CO2 will be a definite plus point for fleets with a 14% BIK tax rate and no VED to pay, but that’s no better than any of the other cars in its segment.

Although the Leon doesn’t have a strong advantage in any costs area, consistency wins the day, and it manages to have a little more driver appeal through its styling and equipment.