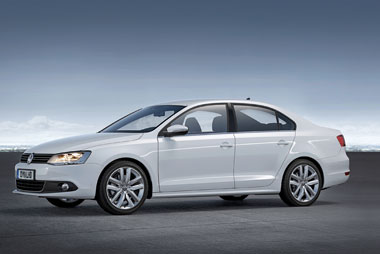 Some uncharitable people have described the Volkswagen Jetta as a Golf with a boot.

Perhaps this description has been one of the reasons why the Jetta – and the Bora before it – has such a low profile in the UK, particularly as we seem to prefer hatchbacks in mainstream cars.

In fact the small compact saloon sector has been dwindling for the last few years. For example, you can no longer buy a four-door version of the Ford Focus, Mazda3 or Renault Megane in the UK.

So the latest version of the Jetta arrives with fewer rivals in the mainstream sector, leaving top-end versions snapping at the heels of cars wearing premium badges.

How can this car, so frequently derided as a mere Golf derivative, compete with cars like the 3 Series and A4?

Well for drivers currently in the 3 Series and A4, they probably won’t be interested in the Jetta.

They are making their way up the corporate ladder and in that image-conscious sector of the market wouldn’t expect to see a switch to a car with a mainstream badge as signalling their next rung upwards.

Maybe the latest Passat is a more realistic alternative for drivers in a 318d or A4 2.0 TDI.

However, there are numerous reasons why the Jetta should stand out from typical mainstream fleet hatchbacks.

According to Volkswagen, every visible external and internal panel in the Jetta is new.

It is larger than the previous version of the Jetta – 90mm longer and 23mm taller – with a longer wheelbase and more space for rear passengers.

There is much of the Passat in the design of the chrome-rimmed instruments and the general upmarket interior feel.

Given the uniformity of some of the styling elements of today’s Volkswagens, from outside it would be easy to mistake the Jetta for a new Passat from a distance.

The Jetta shares its engines with the Passat (as well as the Golf), and our 140bhp 2.0 TDI test car combines ample performance with parsimonious fuel consumption.

CO2 emissions of 126g/km and economy nudging 60mpg on the combined cycle are pretty impressive.

Refinement is also exceptional and its sophisticated chassis makes every mile spent behind the wheel is enjoyable.

Think more downsized Passat than Golf-with-a-boot, and you’ll get a better idea of how this unsung hero of the Volkswagen range performs.

The Jetta appears highly competitive in SE specification, particularly in relation to the Volvo. The Seat is better equipped, while the Cruze looks inexpensive.

The Jetta has a clear lead here, which shouldn’t be surprising as it’s the newest car. The Cruze is the most powerful in this group and it seems to penalise its CO2 performance.

Although we know the official combined fuel consumption is often difficult to replicate in real life, the 8mpg difference between the Jetta and Cruze could mean an extra £2,500 over 80,000 miles.

The Jetta emerges a clear winner, even up against the Cruze, which has a significant P11D price advantage. While the Seat is better equipped, it is some distance from the Jetta.

The Jetta scores an easy win in costs against some desirable com-petition.

The Volvo looks expensive by comparison, and while the Exeo is also out of touch, the model selected for comparison is well equipped and popular among fleets.

The Cruze stacks up well, but needs a more frugal engine option.