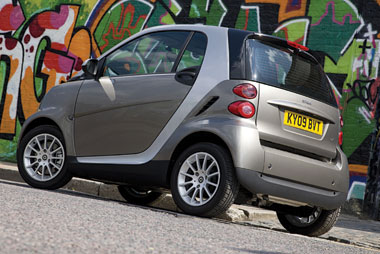 When it arrived in the UK, the Smart Fortwo CDI had the dubious honour of being one of the least powerful cars to be launched for many years.

Its 45bhp 799cc three-cylinder diesel engine didn’t have much in the way of performance, but it was a car aimed at urbanites and had ultra-low CO2 emissions of 89g/km.

It took almost 20 seconds to reach 62mph from rest and like all Smart Fortwo models was limited to 85mph – not that a limiter would have to work hard in this car.

While its lack of outright speed wasn’t much of an issue around town, Smart has managed to carry out an engine upgrade that now makes the car less painful on the motorway.

Even better news for fleet operators and drivers is that the 9bhp increase has not had an adverse affect on CO2 emissions or fuel consumption.

While 9bhp might not sound like much, for the Smart Fortwo CDI it’s a 20% increase, while torque is also increased by 15lb-ft to 96lb-ft.

Criticism of the sequential manual gearbox on the Smart and other small cars has been well documented, and here some of the complaints still remain, although this is the best version we’ve seen yet.

When left to its own devices in automatic mode, it can seem slow-witted when changing up through the gears.

The diesel Smart has an exceptional official fuel consumption figure of 83.1mpg on the combined cycle.

I have no doubt that in certain conditions that would be achievable, but many of the 600 miles or so I spent in the car were on the motorway, and typical fuel consumption for motorway driving was somewhere in the mid-50s.

The Smart is best as a pool car or urban runabout, but doesn’t look so clever now hybrids match its low CO2 and other four-seat small cars can match it on overall costs.