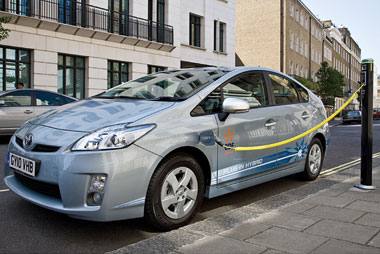 Not content with the increasing success of the Prius petrol-electric hybrid, Toyota has now developed a plug-in version – the Prius PHV (Plug-in Hybrid Vehicle).

It still uses the same configuration of a 1.8-litre petrol engine up front and battery pack beneath the boot, but this version can be plugged into an electric vehicle charging point, enabling it to travel further in electric-only mode.

Compared with the standard Prius, which can only cover 1.2 miles on electric power before the petrol engine kicks in, the PHV will cover 12.5 miles without the need for fossil fuels.

That’s certainly relevant as only 20 Prius PHVs will be let loose in the capital as part of a three-year trial demonstration from July.

The cars will be spread between two of Toyota’s existing fleet customers – Sky and News International – as well as Government partners in the trial – the Metropolitan Police, Transport for London and the Government Car and Despatch Agency.

Toyota plans to get the car into showrooms by early 2012.

The big draw for the Prius PHV is its phenomenally low fuel costs.

Toyota claims that it will return an average 108.6mpg and emit only 59g/km of CO2, which is groundbreaking.

The cost has yet to be confirmed.

Drivers of the 20 cars in the UK will pay around £300-£400 per month to lease the Prius PHV under the current scheme.

According to Toyota, that’s not necessarily indicative of how much fleet operators will pay when the car goes on sale.

Despite the low running costs, the Prius PHV will still pump out 134bhp with the engine and the electric motor working in tandem and reach 62mph in 13.7 seconds.

Behind the wheel, it’s virtually impossible to tell the difference between the PHV and the existing Prius.

It glides along silently and all the torque from the electric motor is available from zero revs, so the Prius is actually quite nippy and keeps up with aggressive city traffic well.

Inside, the boot floor is slightly higher due to the larger battery pack beneath it, but there’s little compromise in terms of space.

The pricing will make or break the Prius, as it’s guaranteed to be more expensive than the standard car.

If Toyota gets it right and sets an affordable figure then it could be a tremendous success.