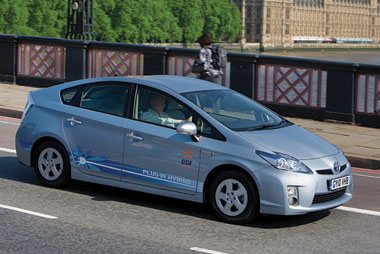 During 2011 a number of businesses and organisations will be installing charging points for electric vehicles.
Some of these EVs are being introduced this year, but in another 12 months there will be the choice of plug-in hybrids or range-extended vehicles.
One of the most familiar will be the Toyota Prius – already a common sight on our roads, particularly in urban environments where the hybrid technology is in its element.
Now in its third generation, the technology has matured and Toyota has more experience in full hybrid technology than any other car manufacturer, with more than two million models sold.
The latest version of the Prius can run for up to two miles at low speeds on battery power alone, but from 2012 customers will be able to choose a plug-in version.
Using lithium-ion battery cells, the Prius PHV will be capable of travelling up to 12.5 miles purely in EV mode.

That should be enough to cover many short journeys and the charge from a standard 240v electricity supply from empty to full should take around 90 minutes.

It also uses regenerative braking technology and can return energy to the battery when decelerating to help maximise its range.

When the battery is depleted the car behaves like a regular Prius, able to run purely on the battery at low speeds, but with the 1.8-litre petrol engine providing the bulk of its power, assisted on occasions by the battery.

If you think this kind of technology could be expensive, bear in mind that it qualifies for a grant of up to £5,000 assuming the Government decides to extend its scheme’s cash allocation.

Compared to the regular Prius, the plug-in car has slightly less boot space – a result of a larger battery pack – and a flap ahead of the front passenger door houses a power-in socket.

We spent a few days in the Prius to see how practical it is, and whether it helps overcome the current ‘range anxiety’ criticism of a battery EV.

We initially drove back to our Peterborough offices from Toyota headquarters in Surrey – a distance of about 150 miles, the vast majority of which is on the motorway.

Sustained high speeds don’t bring out the best in electric vehicles or hybrids.

In an EV the battery depletes quicker, in a hybrid the engine runs almost constantly at high speed, negating the benefit of the fuel-saving electric motor while still carrying its and the battery’s weight.

However, the Prius stayed in EV mode from Toyota’s offices near Epsom, and a little way around the M25.

The trip computer reading for the whole journey was about 75mpg.

Not far off the standard Prius’s 74.3mpg on the combined cycle, but a standard Prius on that route at a usual speed of about 70mph would have been unlikely to return 70mpg.

Over the course of the week, I was able to run in EV mode from home on the journey to work.

My route is 22 miles, so I assumed that about half of it would be with no tailpipe emissions.

But the EV mode usually lasted only about eight miles into the trip – a combination of colder weather perhaps causing the heating and ventilation system to sap power, along with speeds between 50mph and 70mph.

For organisations where cars are typically used for very short trips and have the opportunity to recharge during the day, the Prius makes a case for itself.

The economical hybrid powertrain is a useful backup for longer journeys.

By 2012 the market will have other cars with part-electric/part-petrol-fuelled powertrains (Chevrolet Volt and Vauxhall Ampera) as well as diesel hybrids from Peugeot.

Toyota should still be in a strong position, however, given its hybrid heritage and using a proven product which has become commonplace.

EV running for up to 12 miles will appeal to some fleets and if the plug-in vehicle grant is extended, the case for Prius Plug-in will be stronger.