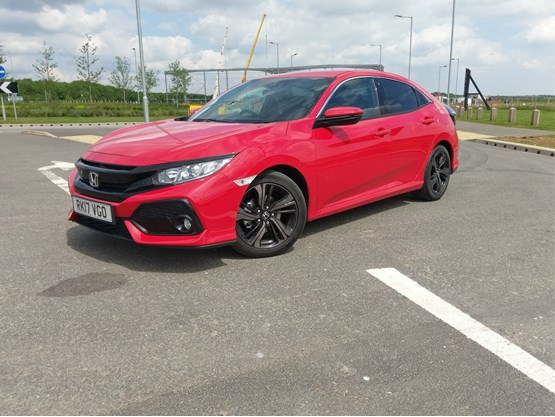 The "good-looking" Honda Civic has been a welcomed addition to our test fleet, despite technology niggles. Sarah Tooze reports.

The latest was a car wash attendant who commented what a “good-looking motor” it was.

Apparently it was the first time he’d seen one, although I have spotted a few more on the local roads in recent weeks.

Honda says sales of the new Civic are up by around 400 units year-to-date, taking into account that only petrol engines are available at the moment, and excluding Type R sales.

Since launch in February, 8,239 new petrol Civics have been registered, 25% of which have gone to fleet.

Honda says there has been “strong demand” and it has achieved its launch targets.

How the new 1.6-litre diesel will fare when it joins the range in March “is very hard to gauge, given the climate in the market”, according to Honda.

However, historically about 40% of Civic sales have been diesel.

As a relatively low mileage driver (I’ve clocked up 7,668 miles since taking delivery of the Civic in May) I’ve benefited from driving a petrol, illustrating the point that fuel type should be determined by vehicle use.

The Civic has been a joy to drive, gear changes are smooth and the 1.0-litre turbo has plenty of oomph.

Despite its sporty looks, there is ample storage, with a 478-litre boot (with the rear seats up).

There have been a few technology niggles, mainly with the Civic’s sat-nav, but on the whole it proved a welcome addition to our test fleet.

The Honda Civic 1.0 VTEC continues to impress but its sat-nav falls short of expectations in the October update.

Technology in cars is meant to be getting ‘smarter’ but I still find myself experiencing problems with manufacturer-fit sat-navs.

For the third time in the past few months, the Honda Civic’s sat-nav has misinformed me about a road closure.

The first time it happened, on a journey to Newbury, I followed its diversion and then later discovered online that the road had not been closed (see August update below).

So, when it warned me that the A47 was shut on the way back to Peterborough from a holiday in Norfolk last month, I was immediately sceptical.

This time I had my husband with me and he checked online before we did a lengthy diversion.

Surprise, surprise, the A47 wasn’t closed.

The third error came just last week on the way back from Nottingham with Fleet News photographer Chris Lowndes.

The road in question this time was the A52. Again, the sat-nav wanted us to take a diversion that would add extra mileage and time to our journey.

The error might have been explained by the fact that I spotted a sign informing us the A52 would be closed that night.

But we were making the journey at lunchtime.

Driving on the supposedly ‘closed’ road doesn’t lead to the sat-nav correcting itself, either. Instead it puts it in a spin.

The road on the map turns black and red and ‘periodic closure’ flashes up on the screen.

I can’t help thinking that if this were an autonomous car it would have sent me on a needless diversion. Three times. In three different parts of the country.

The sat-nav grumble aside, the Civic continues to impress us, with its 1.0-litre petrol engine returning 48mpg (based on the trip computer) and its 478-litre boot (with the rear seats up) providing ample storage. 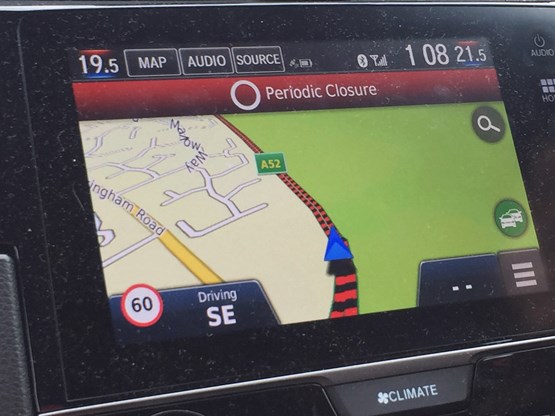 The Honda Civic is currently the only petrol engine model on our test fleet.

We opted for petrol because there isn’t a diesel available yet and with my short commute (22 miles return) rather than a long motorway journey there is a case for me running a petrol (or perhaps even an electric).

However, Honda recently announced it will be adding a revised 120PS 1.6-litre i-DTEC diesel engine to the Civic range in Europe from March 2018.

It will be the first Honda model to be officially tested under the new Worldwide Harmonised Light Vehicle Test Procedure (WLTP), which came into force at the start of this month.

Like the previous New European Driving Cycle (NEDC) test, it is conducted in a controlled laboratory but, according to the Society of Motor Manufacturers and Traders (SMMT), it is “faster, longer and more dynamic, with a greater range of vehicle and engine speeds, engine load, gear changes and temperatures”.

The WLTP is complemented by an on-road test called Real Driving Emissions (RDE), which uses a Portable Emissions Measurement System (PEMS) to measures emissions while the vehicle is driven on the road.

Our 1.0-litre VTEC Turbo petrol won’t go through the new test as it was launched prior to September but there is real world data available from Emissions Analytics.

It reports a fuel economy figure of 39.5mpg (against an official combined figure of 55.4mpg).

That seems poor, especially given we’ve been returning an average of 47mpg (up slightly from the 45.5 reported previously), having clocked up more than 5,000 miles since we began testing the Civic in May.

However, our figure is based on the car’s trip computer reading so it will be interesting to see if that changes when we calculate it manually next time.

I keep getting in trouble with our Honda Civic.

On more than one occasion I’ve released the electronic parking brake and set off without first hitting the foot brake, which results in a lady with a posh accent politely scolding me: “Please depress the brake pedal to release the parking brake.”

It’s the first time I’ve been verbally told off by a car.

Normally, a warning sign might appear on the instrument cluster so I was a little taken aback when the Civic ‘spoke’ to me.

But I think that she has given up on reforming me. The last time I forgot to press the brake a pedal sign simply flashed up on the dash.

Another issue that has cropped up is the inconsistency of the traffic information.

On a 100-plus mile journey to Newbury, the sat-nav diverted me due to a road closure but 15 minutes into my new route it changed its mind and sent me back the way I’d come.

When I checked online there was no evidence that the road had been closed.

Then on the return journey it informed me that there were no traffic problems when I had come to a standstill and the queue stretched as far as the eye could see.

But on the positive side, the seats proved comfortable on the long journey, helped by the fact that, despite the Civic’s sporty looks, it is not a firm ride.

Honda has focused on the driving dynamics of the new Civic with a variable-ratio steering rack which tightens up when turning on twisty country roads.

The six-speed manual gearbox is one of the best I have tested. Gear changes are smooth and I appreciate the positioning of the lever in the centre console.

The rear end of our Honda Civic is nearly proving as controversial as that of the second generation Renault Megane, which was famed for its ‘I See You Baby (Shakin’ That Ass)’ advert.

One colleague vehemently dislikes the Civic’s rear design while I think it makes it stand out and is a big improvement on previous versions.

Admittedly, it does look a little more ‘boy racer’ than ‘company car driver’ but not compared to the Type R, which we’ve declined to test because it’s hard to imagine businesses allowing it on their fleet list.

Our Civic SR, however, is a sensible choice for fleets, with emissions of 117g/km (owing to its 17-inch wheels), and fuel economy of 55.4mpg. The 16-inch wheels in SE trim drops emissions further to 110g/km.

The other talking points have been the Civic’s 1.0-litre turbo petrol engine – Honda’s new three cylinder unit – and its colour.

Colleagues on sister website Parkers are running a Civic in White Orchid Pearl, while Car has one in Sonic Grey Pearl. Neither, in our opinion, do the Civic justice, compared to our Rallye Red.

We’ve clocked up 3,000 miles in the Civic now and it is averaging 47mpg, although resetting the trip computer for a 136-mile journey saw this rise to 52.6mpg.

The spoiler does restrict rear visibility but not enough to cause a problem, particularly as a rear parking camera is standard in SR trim.

Also standard in SR is the second-generation of Honda’s infotainment and connectivity system, Connect, which incorporates Apple CarPlay and Android Auto integration.

The touchscreen is not as responsive as I would like, but that’s a minor complaint.

On the whole, after two months in the Civic, I’m pretty impressed.

Now to convert my colleague to the Civic’s appeal…

The newest addition to our long-term fleet, the Honda Civic, has to compete in one of the most important segments for fleet operators, the lower-medium sector, with the Ford Focus, Vauxhall Astra and Volkswagen Golf among its main rivals.

So how does it stand out? By looking distinctly more sporty than the other models, with its aggressive styling, low stance and sloping roofline.

It won’t be to every business’s or company car driver’s taste but will certainly appeal to those wanting a change from more sedate looking company cars.

The Civic’s engine line-up is only petrol for the moment – a 1.6-litre DTEC is expected later in the year – but they are new turbocharged units (a three-cylinder 1.0-litre with 129PS and a four-cylinder 1.5-litre with 182PS).

We’re testing the 1.0-litre VTEC Turbo in SR guise, which is expected to be the most popular version. Its 17-inch wheels (as opposed to the standard 16-inch on the entry level SE trim) push CO2 emissions up from 110g/km to 117g/km but arguably the difference in benefit-in-kind bills of £12 a month is worth it for the extra equipment.

However, blind spot information and cross-traffic monitor are only available on the EX grade.

On the road, first impressions are good. The six-speed manual gearbox is a delight and it’s surprisingly relaxing to drive (rather than sporty).

We’re averaging 45.5mpg after 1,453 miles. That’s 10mpg below the official figure but 6mpg better than shown on the Equa Index.