ONCE executives are a few rungs up the corporate ladder, the company car morphs into something different – it becomes more focused on reward than essential business travel.

This used to mean offering a choice between the three German brands if you wanted a complete executive package, but things are different for today’s fleet manager.

Alfa Romeo made some headway in this premium sector with the 156, but its eye-catching design masked reliability and build quality issues which undermined the prestige experience.

In its replacement, the 159 – sitting on a new platform which is wider to free up cabin space – Alfa is trying again and trying harder.

Initial impressions suggest there is enough to allow entry into the hallowed choice lists normally dominated by the Germans, although on reading the car’s brochure it doesn’t seem Alfa Romeo has been brave enough to introduce the word ‘quality’ yet.

The 159 tested here is in SportWagon guise, with a 2.4-litre JDTM turbodiesel engine offering a class-leading 200bhp.

This car certainly has the power to match its striking looks. The menacing front end blends into a square, squat stance.

The interior isn’t a disappointment either, especially with the leather seats which are standard in Lusso trim, and very comfortable.

The central console is topped by three round gauges, showing turbo pressure, engine temperature and fuel level. But the car still hasn’t shaken off the Italian passion for throwing buttons around the interior. There are lots of column stalks which all have dials or buttons, which add to the confusion.

It is practical, too, for a car of this type which falls halfway between a hatchback and full-blown estate. In SportWagon format the Alfa offers 445 litres of luggage space with the 60/40 split rear seats in place, compared to 405 litres in the saloon. Fold them down and you get 1,235 litres. 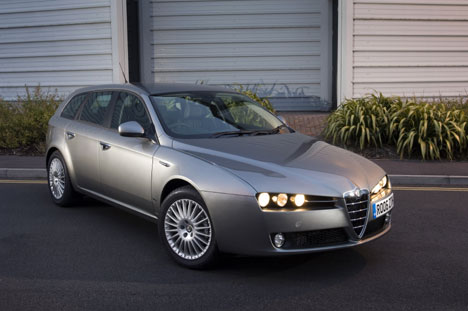 On the 159’s boot there is a high lip to negotiate so objects have to be lowered in, rather than sliding them.

For the majority of driving conditions, third and fourth gear are pretty much all you need, taking you from roundabouts up to 70mph with ease.

The five-pot engine sounds great, and although its real-world thirst was about 30mpg, you can’t help using its power. Turn-in is sharp and fuss free, with no sign of the heavy diesel engine pushing the front end wide.

This seems to be an Alfa Romeo with all the bad bits taken out, although the ownership experience will also depend on the buy-in of the dealer network to tempt fleet managers.