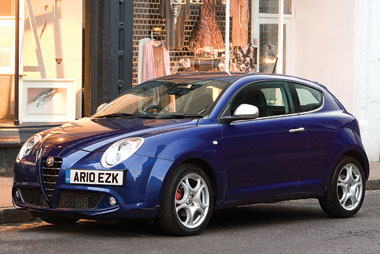 The Alfa Romeo Mito became the backbone of the company’s UK sales last year, leading it to its most successful spell since 2003.

But the company is already upgrading the Mito range with some hi-tech petrol engines that make it more appealing to user-choosers.

Called MultiAir, the two engines – 135bhp and 170bhp versions of a 1.4-litre – use sophisticated technology to offer higher performance and lower fuel consumption and emissions.

Along with the introduction of the new engines, all Mitos now gain an automatic stop/start system to cut CO2 emissions and save fuel.

But the ‘greener’ MultiAir engines benefit from a valve set-up that can optimise air intake for performance or economy and reduces turbo lag.

It’s good news for anyone thinking of choosing a petrol Mito as a company car because, despite a slight price premium over the previous 1.4 TB versions, company car tax bills would be lower by comparison.

The 135bhp MultiAir has CO2 emissions of 129g/km and would offer a few years of stability against company car tax increases.

The 170bhp Cloverleaf version at 136g/km also results in modest company car tax rates – making it a little easier on the pocket for drivers than a Mini Cooper S.

Like most Mitos, the MultiAir versions come with Alfa’s DNA system which can adjust steering and throttle response according to the mode selected. ‘D’ is dynamic, ‘N’ is normal and ‘A’ stands for all-weather.

The Cloverleaf, which feels noticeably more rapid than the 135bhp version, also has an active suspension system.

It does feel a little firm, but is unduly harsh only on poor road surfaces.

Alfa will soon launch a DSG-style auto option on the 135bhp MultiAir.

Not so long ago you could rely on Alfa engines having among the highest CO2 emissions in their classes.

Now they are among the best and the Mito is proving a competitive sporty small hatch.

To book a test drive with the latest Alfa Romeo Mito, reserve your place at the Greener Company Car In Action today, for more information visit