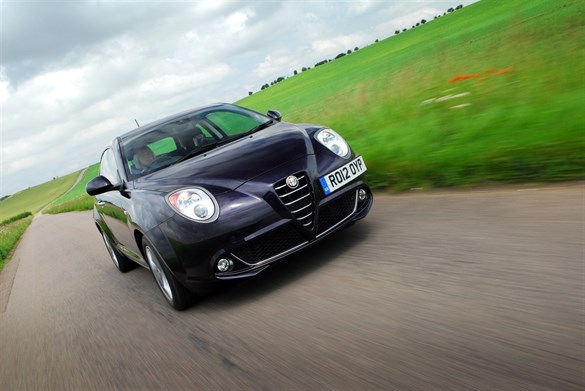 Choosing a diesel engine in a small car has often been a difficult decision to justify. The higher price of diesel engine cars over petrol equivalents, together with higher pump prices, makes the higher mileage required to break even more difficult to achieve on a small car.

However, if a fleet policy operates a CO2 cap at 100g/km, the choices in the small car sector have usually been restricted to diesel. But petrol choices are growing, not least because of the relatively recent introduction of Fiat’s two-cylinder Twinair engine, which first entered the market almost two years ago in the 500, and is now available in the new Panda, the 2012 Punto and the Alfa Romeo Mito.

In the niche that the Mito competes in – going up against distinctive three-door small cars such as the Mini, Audi A1 and Citroën DS3, among others – no rival currently offers a petrol engine with CO2 emissions of less than 100g/km.

The Twinair uses a 895cc engine with a turbo to produce 85bhp (other variants are in the pipeline with higher and lower power outputs), and achieves 98g/km with fuel consumption of 67.3mpg on the combined cycle.

As well as giving BIK tax payers access to the 10% bracket, it also qualifies for a 100% discount on the London congestion charge.

The Twinair also comes with a few changes to the Mito, and aside from new colour and trim combinations, the DNA power and chassis settings now remain in the mode the car was left in when switched off rather than defaulting to N or ‘natural’ mode. Although called natural, power is actually capped in this mode so the car doesn’t feel as lively or responsive as in D ‘dynamic’. But with restricted power it also helps achieve these impressive fuel consumption and CO2 numbers, effectively running as if it were a 75bhp car.

However, in Dynamic mode Alfa has injected the fun factor and the Mito makes for a rewarding driving companion. The two-cylinder engine has an off-beat burble and with the turbo behaves much like a diesel in how it delivers its power.But high-rev thrills will take its toll on fuel consumption.

The Mito is also charismatic to sit in, and the use of Italian text on the dials (‘benzina’ on the fuel gauge and ‘acqua’ on the water temperature gauge) make the car feel special.

Not only does Alfa give drivers the choice of sub-100g/km diesel and petrol models in the Mito range, it also offers charismatic alternatives to its rivals.