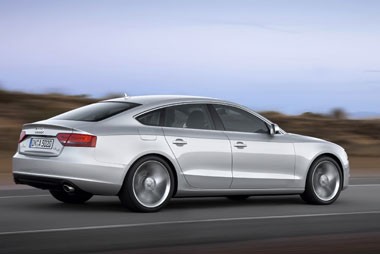 Audi celebrated its 100th anniversary with the launch of the A5 Sportback, a five-door version of the A5 coupe.

Further engine variants and additional Quattro models will be phased in during 2010.

Audi is clearly trying to carve a new niche in the market and attract buyers from many different segments, which makes it a difficult model to draw direct comparisons with other cars.

With CO2 emissions of 137g/km, making it well under the 160g/km threshold for increased writing down allowances, it’s sure to interest the fleet market.

Throw into the mix a claimed 54.3mpg, a top speed of 141mph and 0-62 in 8.7 seconds for the 2.0-litre diesel, plus its premium status and residual value benefit, and it continues to impress.

The boot boasts a 480-litre capacity when the rear seats are up, coming close to matching the A4 Avant.

And when luggage takes priority and the rear seats are folded down, a total of 980-litres can be freed up.

The A5 Sportback combines the striking looks and curves of the coupe with the everyday practicality of the A4.

It drives well, with plenty of standard equipment, while offering useful savings to both the company and the driver.

Factor in class-leading build quality and strong RVs and its appeal is evident.