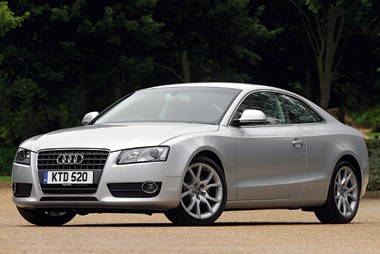 The coupé – sporty, dynamic, suave, cool. The saloon – usually not.

With the A5, Audi has tried to mix the sexy lines of a two-door with the practicality of a four-port boxmobile.

The latest addition to the German marque’s range is a four-seat coupé, with more than a token attempt to get people into the back seats.

There’s proper space for grown-ups back there, rather than two egg cups and a twig’s worth of legroom.

Six-footers might complain on long-journeys, but it’s certainly better than some rivals.

There’s also a massive boot, capable of gobbling up 455 litres of luggage through a metre-wide mouth.

So, practicality-wise, things look good, but does that ruin the coupé looks?

Upon first seeing the pictures of the A5, I had my doubts.

But in the metal, it’s really quite a looker. Its designer, Walter de’Silva, reckons it’s the best-looking car he’s ever created.

Considering he penned various Alfa Romeos and SEATs, that’s quite a statement.

I’m not sure I’d rate the A5 above his very sexy Lamborghini Muira concept from a few years ago, but I won’t doubt the beauty of the new car, which manages to retain the traditional robustness inherent in larger Audis while adding very attractive curves and swoops. It’s the A4 and A6’s hitherto unseen attractive cousin. And it’s very welcome.

The interior is somewhat less exciting – if you’ve been in a recent Audi, you’ll know exactly what to expect. But that’s not necessarily a bad thing, as recent Audis are well laid out and well put together.

Leather is standard, as are electric front seats with lumbar support, and everything feels as solid and dependable as a British Olympic cyclist.

Under the bonnet is a 2.0-litre turbocharged engine with 177bhp. At full acceleration it will hit 62mph from standstill in 8.4 seconds and will reach 140mph.

Officially, the A5 will return 39.8mpg and emit 169g/km of CO2, which is by no means bad, but on paper looks like being blown out of the water by BMW’s equivalent 3 Series Coupé and its hugely impressive Efficient-Dynamics package.

On the move, the A5 feels lighter than its 1,895kg suggests it should. The steering in particular is light – the uncharitable might use the description ‘vague’ – which is great at low speeds but translates to a numb sensation at greater velocities.

This isn’t helped by a neutral-feeling chassis. Audis aren’t famed for their excitement, and this one does nothing to buck that trend.

The engine is smooth and quiet, but struggles ever so slightly to shift the considerable bulk of the A5.

This would be where I’d start to consider a diesel engine instead, with its superior low-end torque.

My main gripe with the A5, however, is its driving position.

The seat is comfortable, but the pedals are offset to the right more than is reasonable, which resulted in my knee clunking into the steering column every time I changed gear.

After a while, this became painful and annoying.

In essence, the A5 is a good car – well-made, comfortable, reasonably practical and competent if not exciting.

But it’s not really the car to drive that it is to look at. Which is a shame.

The Brera is stylish and the cheapest to buy. It also has decent power (182bhp), but unusable back seats.

Some way behind is the A5 with standard leather and 177bhp, but no cruise control.

Victory for the green BMW thanks to its EfficientDynamics package.

A 40% company car taxpayer would face a monthly bill of £172, compared with the second-placed Audi and its bill of £191.

Top marks to Mercedes-Benz, thanks to its variable service intervals and small 16-inch wheels.

It will cost almost £400 less than its nearest rival to service and maintain over three years/60,000 miles.

The Audi has variable servicing, as does the BMW. The Alfa is fourth and has a service interval of 18,000 miles.

EfficientDynamics does it again.

Despite a CAP residual value of 35%, the cheaper Alfa loses the least amount of money over three years/60,000 miles.

The A5 has an RV of 44% but loses fractionally more.

The Audi is the cheapest car to run over three years/60,000 miles.

It consistently performs well across the range of costs to beat the BMW, which is cheap on fuel but fares less well elsewhere.

The Brera loses the least in depreciation, while the CLK is some way off in all areas.

Verdict
On pure costs, the Audi is the clear winner.

It is almost £1,000 cheaper to run than the BMW and is well specified and well made as well as being a bit of a looker.

But the BMW is the better car to drive and drivers will appreciate lower tax and fuel bills. It’s a close run thing, but when considering which car to own, it has the edge over the rivals.

The Brera is stylish but can’t compete on price or driving experience, while the CLK, which will be replaced next year, is out of date and is outclassed in this company.