A 1,500-MILE trip to Scotland was on the cards for myself and my partner – and what better car for such a journey than our sturdy Audi long-termer?

The A6 had everything I needed for a blast up the M6 to the craggy peaks of the Highlands – a large boot to store all my partner’s detritus and my one little bag, a powerful diesel engine to gobble up all those motorway miles while returning more than 30mpg, a delightful stereo to soothe our fevered brows in times of traffic jams and permanent four-wheel drive just in case the going got tough and slippery.

The A6 is a joy to drive in all conditions. The leather seats are like huge armchairs in a gentlemen’s club, the automatic gearbox is so smooth that changes are imperceptible and the engine is so quiet that at 70mph, you’d think it wasn’t even working.

There were a few back twinges, but that that’s probably inevitable with such a long journey. Mind you, I could have done with a lumbar adjustment, which I think might have helped ease things.

After a couple of refills I checked the car’s fuel consumption and was amazed to find that it was returning 36.6mpg, just over the official figure.

It’s a tribute to the Audi engineers that they have managed to magic so much frugality into such a big lump of metal.

My only main gripe with this car is its complicated array of knobs and switches. It feels as though you need a degree in electronics to work it all – it took me 10 minutes to find out how to open the glovebox to get at the CD autochanger.

I finally resorted to asking the previous tester, who informed me you had to press an innocuous little button on the dash – how daft is that?

However, the major controls which are contained in the MMI (Multi-Media Interface) are a lot more intuitive to use than those on rival BMW’s iDrive system. 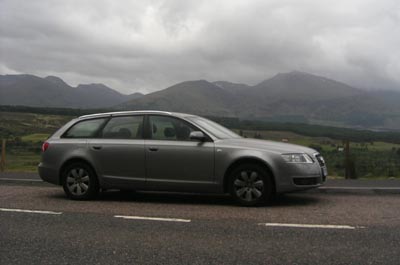